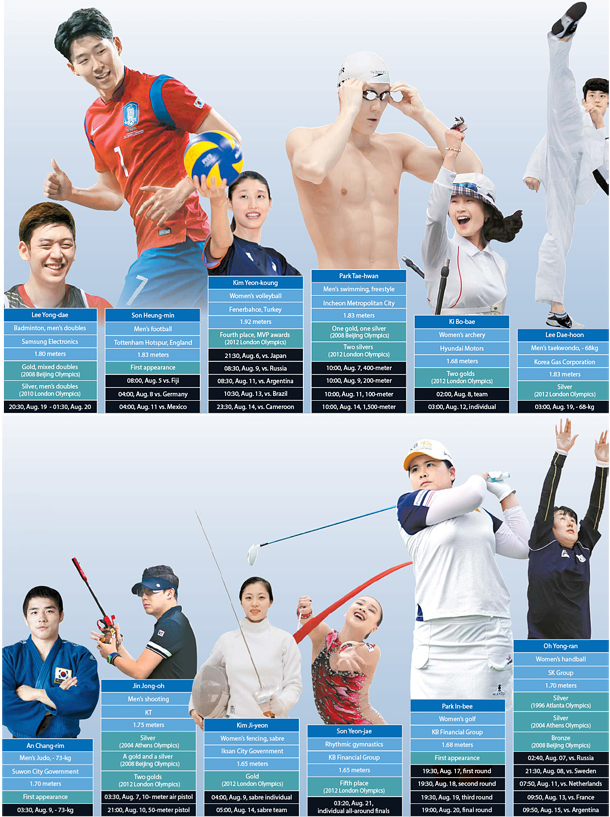 Son Heung-min with his polished boots and Ki Bo-bae with her state-of-the-art bow and arrows have one color and one color only in their mind this summer - gold. And this also goes for the 202 compatriots of Son and Ki on Team Korea who will compete at the 2016 Olympics in Brazil.

Korea has sent a total of 204 athletes to the Olympics this summer to participate in 24 different events. This is the smallest delegation since 1984 but this does not diminish the passion of these athletes. They have shed enough tears, blood and sweat during the past four years to prove it.

Korea is expected to excel again in events such as archery, shooting, judo and taekwondo. In addition to these, Korean fans are also hopeful that they might see their compatriots with their necks adorned with Olympic medals in events such as football and golf, a sport that is coming back to the Games for the first time in over a century. Following are some of Korea’s gold medalist hopefuls.

Badminton may be a backyard game often played during birthday parties in the United States, but in Asian countries such as Korea and China, this is a serious competitive sport that grabs the attention of thousands. At the center of that attention stand badminton stars such as Lee Yong-dae. A gold medalist in mixed doubles at the 2012 London Olympics, Lee will play in men’s doubles during this year’s Games with veteran player Yoo Yeon-seong at his side. As of Thursday, Lee and Yoo are ranked first in men’s doubles, according to the standings by Badminton World Federation World Ranking.

There is no other way to describe Son Heung-min than as the ace of the Olympics football team. As the only player to play in England, the home of football, Son is being watched not just by Korean football fans but also football fans around the globe. Son has recently been selected as one of the football upstarts to watch this summer by FIFA, alongside the Brazilian star Neymar da Silva Santos Junior. With Son at the front, the reigning bronze medalist Korean Olympics squad hopes to repeat or even outperform the feat accomplished by the team in 2012.

As the only volleyball player playing in Europe, Kim Yeon-koung is without a doubt the leader of the otherwise young Korean volleyball team. Kim led the Korean team to qualify for the Rio Summer Games during regional qualifications at the World Olympic Qualifying Tournament in Tokyo earlier this year. Although the team is a regular medal winner in Asia, Olympic medals have eluded the Korean volleyball team since the 1976 Summer Games in Montreal, when the team earned bronze. But Kim is hopeful this summer, expecting to claim the first Olympic medal in volleyball in four decades.

Enduring emotional turmoil and drama, the Korean swimming star Park Tae-hwan finally obtained a ticket to Brazil. Once disgraced after a shocking doping scandal, Park is now hopeful to start with a clean slate at the Rio Olympics and redeem his reputation as a national icon. Throughout his career, he swam side-by-side with world stars such as Michael Phelps of the United States and has four Olympic medals, two world titles and 20 Asian Games medals on his shelf. In this year's Games, Park says he hopes to enjoy the Games rather than worry about placement.

Since Seo Hyang-soon became the first Korean archer to stand atop an Olympic podium at the 1984 Summer Games in Los Angeles, Korea medaled 18 more golds and is ranked at the top in medal tallies in the event with 19 golds, nine silvers and six bronzes. Korean archers once again hope to take the podium this year and Ki Bo-bae, reigning gold medalist from the 2012 London Games, is expected to lead the way. Ki, currently ranked third in the World Archery Rankings, is determined to win her second gold in the individual event and Korea’s eighth consecutive gold in the team event.

Since taekwondo made its full debut as a medal sport at the 2000 Summer Games in Sydney, Korea, the birthplace of the sport, quickly rose to the top as the most successful nation in the event at the Olympics . Although its supremacy in the sport has somewhat faded over the past decade, this year’s Korean taekwondo practitioners, such as Lee Dae-hoon, are determined to bring back the old glory. Lee, the 2012 Olympic silver medalist in the 58-kg division, will compete at the 68-kg division this year, hoping to bring the old reputation back for Team Korea.

A total of 12 judokas, seven male and five female, have finally arrived at Rio de Janeiro on Wednesday, ready for some action at this year’s Summer Games. Korean judokas, whose practice sessions in the lead-up to the Olympics are notorious for their brutality and intensity, have high hopes for this year’s Games and An Chang-rim, the No. 1 in the world in the 73-kilogram classification, who claimed his Korean citizenship to join the Korean squad, will be at the frontline of their hunt for gold medals. Known for his aggressive and versatile style of fighting, An hopes to bring home his first Olympic medal.

When it comes to the Korean shooter Jin Jong-oh, what fans are curious about is not whether he will win a medal at this year’s Olympics but how many he will actually claim. Jin, the only athlete who has won two consecutive Olympic gold medals in men's 50-meter pistol, has 15 gold medals on his shelf including three from the Games. As the reigning champion in the 10-meter air pistol and 50-meter pistol events, Jin now aims to leave his legacy in the world of shooting by taking his third Olympic gold this summer. Jin holds world records in both categories.

The gold medalist from the 2012 London Olympics in fencing is back and ready to fight her way to the top once more. Kim Ji-yeon, who began fencing at the age of 13 in foil but switched to sabre three years later, has been often overshadowed by fellow Korean fencers such as Nam Hyun-hee, who has more than 10 medals in fencing from various events such as the World Championships and the Asian Games, including a silver and a bronze from the past two Olympics. But Kim has risen to the top after proving herself to be the ace of Korean fencing at the 2012 London Olympics and she hopes to repeat the feat once more.

Before Son Yeon-jae became the first Korean to ever reach the Olympics finals in rhythmic gymnastics during the 2012 London Olympics, few in the country cared to watch the event while some didn’t even know what the sport was. But now, as Son aspires to become the first Korean to win an Olympic medal in the event, all eyes are now on the nation’s sole representative in rhythmic gymnastics. Her performance in the lead-up to the Games this season has been noteworthy. Consistently topping her personal best, it is no doubt that Son is on upward trajectory.

Golf is returning to the Olympics for the first time in 112 years and as the dominant force in women’s golf, Korean golfers such as Park In-bee are going into the Rio Olympics with high hopes. Park, who is ranked No.5 in the world as of Thursday and one of the only two Korean LPGA Hall of Famers, has fought against incessant injuries throughout the season this year. Although she considered skipping the Games, Park decided she would not miss the chance to participate in the once-in-a-lifetime opportunity for anything in the world. Pak Se-ri, the head-coach of the team, hopes for podium sweep by the Koreans.

For Oh Yong-ran, the Summer Games in Brazil this year will be her fourth, and most likely the last, Olympics. Oh grabbed her first Olympic medal during the 1996 Summer Games in when she played as goalkeeper. Although Oh earned two silvers and a bronze with the Korean squad in the three Olympics she played in, gold has always evaded her. But as a team veteran and one of the oldest athletes to participate in the Olympics this year at the age of 44, Oh hopes to finally wear gold around her neck at the end of this year’s Games.