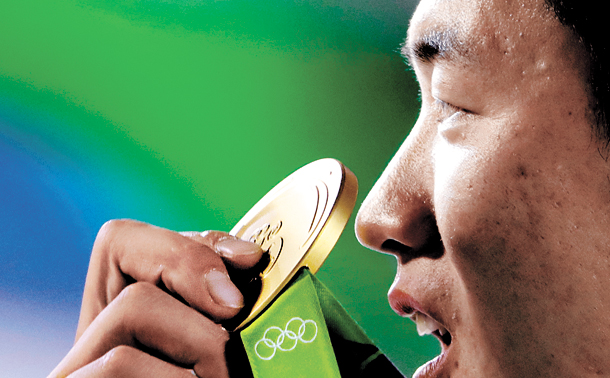 Korean archer Ku Bon-chan holds up his gold medal during the awards ceremony for the men’s team archery event at the archery range in the Sambadrome in Rio de Janeiro on Saturday. [AP/NEWSIS]

Archery proved once again to be a gold mine event for Korea, as the men’s archery team wasted no time clinching the nation’s first gold medal at this year’s Summer Olympics in Rio de Janeiro on Saturday.

Kim Woo-jin, Ku Bon-chan and Lee Seung-yun went head-to-head against Brady Ellison, Zach Garrett and Jake Kaminski of the United States on Saturday at the archery range in Sambadrome. During the last Olympic Games in London, the Koreans lost to the Americans in the semifinals, forcing them to settle for bronze after defeating Mexico.

In the final match in Rio on Saturday, the Korean trio did more than just avenge their loss, dominating the Americans with a shutout set score of 6-0 (60-57, 58-57, 59-56), including a perfect first set. Korea had a flawless performance from the quarterfinals all the way to the end, taking down the Netherlands in the quarters and Australia in the semis with perfect scores as well.

Saturday’s gold was the fifth Olympic title for the men’s archery team and the first since the 2008 Beijing Olympics. But more notable than anything else is the relative youth of the Korean trio. Not only are all three archers still in their early 20s, this year’s Olympics also mark their debut in the quadrennial event.

Kim entered the spotlight in 2010 when he claimed two golds during the Guangzhou Asian Games at the ripe young age of 18. Two years later, however, Kim was unable to make the national team for the London Olympics. 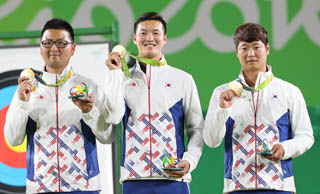 From left, Kim Woo-jin, Ku Bon-chan and Lee Seung-yun, members of the Korean men’s archery team, hold up their medals after clinching the nation’s fifth Olympic gold in the event on Saturday in Rio de Janeiro. [NEWSIS]

I tasted the bitterness of defeat four years ago,” Kim said. “Continuous success made me complacent, I think. Such a tough process made me work harder.

“I didn’t even watch TV during the London Games,” Kim added. “I was not going to let something like that happen ever again.”

Fellow teammate Ku also put on a stellar performance, hitting the target right in the center to tally 10 points every time he shot an arrow. All six of his arrows landed at the center of the target.

“I actually did not know I shot them all at the center,” said the 23-year-old archer after the event, a testament to the level of his concentration and mental agility during the match. “What a beautiful night.”

Lee, the youngest on the team, is also known as the less showy of the three and often prefers spending time alone. Regardless of his young age and character, the 21-year-old is quite the archer.

Lee has been shooting arrows for the Korean national team since he was in high school. He won two medals during the youth world championships in 2011 as the team’s cadet, and made his full debut on the senior national team in 2013. 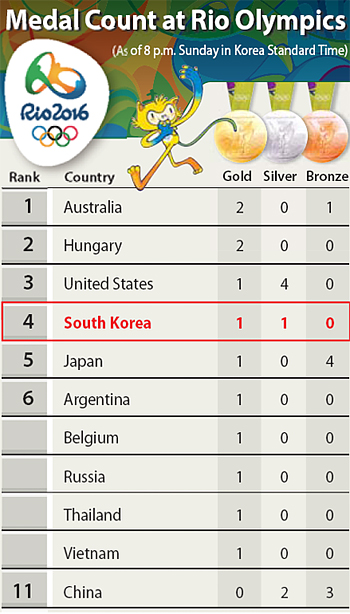 That year, Lee reached No. 5 in the world rankings, even defeating his compatriot Oh Jin-Hyek, an Olympic champion 14 years his senior, in the World Archery Championship.

When it comes to style of play, boldness and ferocity can best describe the young archer. During the 2013 Archery World Cup in Belek, Turkey, he scored zero during one of his attempts.

But Lee did not flinch from the mistake and kept his pace, eventually winning gold from the event.

The trio also boasts a level of teamwork unmatched by any other teams in the sport. They formed their group during the 2015 Summer Universiade in Gwangju, Gyeonggi, during which the three claimed gold in the team event and swept all three medals in the individual event.

Lee took gold from the tournament, while Ku and Kim each won silver and bronze.

Now that the Olympic team event is over, the three archers are competitors once again. Ku and Kim are determined to turn around their performance from the 2015 Gwangju Universiade and not let Lee, the youngest of the three, get away with gold.

“We are enemies after today,” Ku said with a smile on his face at the end of the team event.

But regardless of who gets gold, the Korean team hopes to make a podium sweep at the individual event.