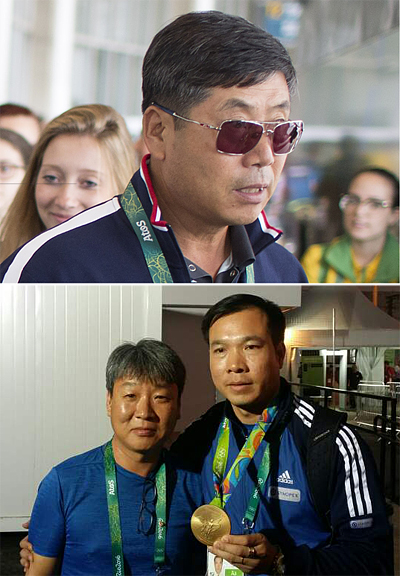 The Olympic Shooting Centre in Rio de Janeiro, Brazil, was filled with the Vietnamese national anthem during the Victory Ceremony after the 10-meter air pistol competition on Saturday. The ceremony was dedicated to the gold medalist Hoang Xuan Vinh, who became the first Vietnamese to claim Olympic gold in the country’s history. But Xuan Vinh could not have worn that medal around his neck were it not for his coach, Park Chung-gun, a Korean who has been overseeing the Vietnamese shooting team since 2014.

The medal around Xuan Vinh’s neck on Saturday was not just an Olympic prize, either. It was the first Olympic gold claimed by Vietnam, a nation that captured no medal during the 2012 London Games. Even Xuan Vinh failed to tally any medal then, finishing ninth in the qualifying round and failing to make the cut.

But now Xuan Vinh will be returning home to receive a hero’s welcome. He will be awarded $100,000 as part of his prize, quite a fortune considering the per capita GDP of Vietnam is about $2,000. “When Xuan Vinh goes back home, they might have a parade for him,” said Park. “He might even get into some of the country’s textbooks.”

Park could not help but think about Yang Jung-mo, a now retired Korean freestyle wrestler who became the first Korean to earn gold in the Olympics during the 1976 Summer Games in Montreal. Like Yang, the athlete he coached for the past two years became a sports star who made history for Vietnam.

Since Park joined the Vietnamese team after the Asian Games in 2014, he has dedicated himself to the team, sharing everything he knows about shooting with the Vietnamese athletes and training them in the best way he knows how. When Vietnam lacked training facilities and equipment, Park brought the athletes to Incheon, Korea, for training.

Despite his dedication, competing against Korea has always been a great challenge for the coach.

Indeed, Xuan Vinh’s win on Saturday came over Korea’s Jin Jong-oh, the gold medalist for the event during the 2012 London Games, who failed to clinch a medal. At the moment in Rio, there are several Korean coaches, including Park, who are supervising different countries’ national teams in various events. Some have taken to calling this a “Hallyu” of coaches, especially in sports such as archery and shooting.

“There are a lot of great (South Korean) coaches outside our country, and I’m just one of them,” Lee told Reuters, “but I don’t think my position makes them happy or comfortable, especially me working on the American team.”