Golf returns to Olympics, and with a wild course

Golf returns to Olympics, and with a wild course 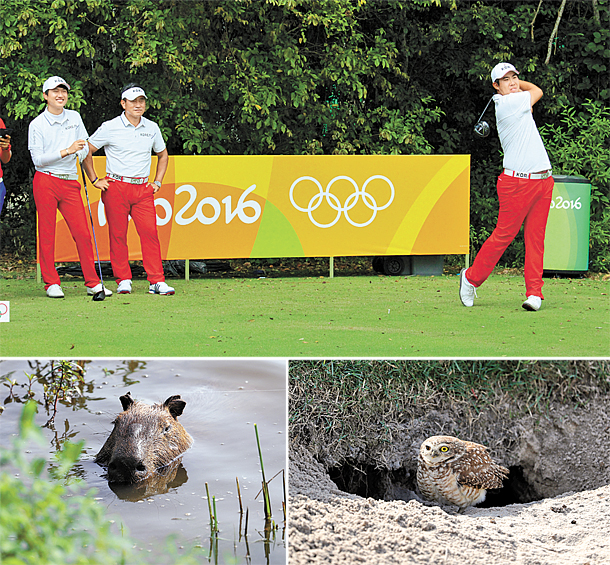 Golf is finally coming back to the Summer Olympics after 112 years. The first round of the men’s event, the very first round that commemorates the return of golf, is scheduled to take place tomorrow in Rio. While big names such as Henrik Stenson, the winner of the 2016 Open Championship, give fans reason to be excited, the Olympic golf course at the Reserva de Marapendi in the Barra da Tijuca zone is also garnering global attention as a venue established for sustainability and preservation of an environmentally protected area.

“I saw a foot print as big as mine while I was making the round on the course,” said Korean golfer Wang Jeung-hun. Many signs found here and there inside the course can attest to Wang’s remark. While some are meant to notify golfers and the gallery that Brazilian law protects wild plants and animals, some are there to warn them of dangerous animals such as alligators. And as if the signs were not enough to warn people of the animals that live there, roughs on either sides of the fairway are filled with animal feces.

Gil Hanse of the United States, who designed the course based on the principle of environmental preservation, was lauded by the Golf Environment Organization, an international non-profit out of Britain dedicated to promoting environmentalism in the golf industry. Although the course is worthy of the recognition, those at the course are often bewildered as they walk around the course. Just imagine seeing a capybara, a giant rodent, suddenly appearing out of nowhere on the field.

The capybara, the largest member of the rodent family, can grow to be as large as a small child. Obviously, those who are unfamiliar with them would be stunned to see them roaming around a course. But despite their intimidating size, they are quite friendly and many golfers have been spotted while rounding the course taking selfies with one of the capybaras living nearby. Animal experts think there are as many as 40 capybaras living in and around the course now. Although popular among golfers and fans, for those who manage and maintain the course, the presence of these rodents can cause quite a headache due to capybaras’ penchants for digging holes and eating grass.

While there are rodents of unusual size on the field, the water hazards contain caiman, a type of alligator that can grow to be up to 1.5 meters (5 feet) long. Although not aggressive in nature, they can still scare the golfers and fans.

That’s not all. When golfers get to the 12th hole, they can find burrowing owls living in bunkers. Staff members from the course have set up a sign to prevent people from approaching their burrows and disturbing the birds.

Before the course was constructed, there were about 118 types of wild animals living in the nearby area. Now there are more than 250 different species. In the nearby forest, it is not uncommon to spot boa constrictors, monkeys and even sloths.

Most golfers participating in the Games are unfamiliar with such a jungle-like setting, including Korean golfers Wang and An Byeong-hun.

In the Olympic tournament that will begin tomorrow, An is assigned to the first group along with Adilson da Silva of Brazil and Graham DeLaet of Canada. He will be the third among them to tee off. According to the International Golf Federation, da Silva is included in the first group because he represents Brazil, the host nation, while DeLaet is in the first group since Canada is the defending champ after George Lyon claimed gold during the 1904 Games before golf was eliminated.