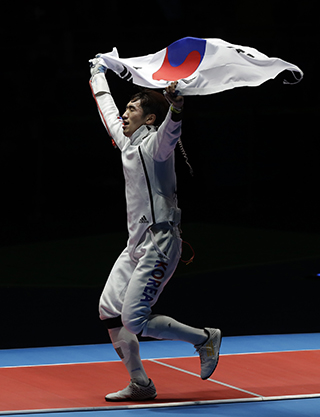 Korean fencer Park Sang-young took gold in the men's individual epee on Tuesday at Carioca Arena 3 in Rio de Janeiro, Brazil, finally ending Korea’s medal drought in the sport that lasted for the first three days of the Games.

Although Park, who is ranked No. 21 in the world in men’s epee, was behind 13-9 by the end of the second set, he eventually defeated Hungary's Geza Imre, No. 3, with a 15-14 score in a dramatic comeback.

The match between the 20-year-old Korean and the 41-year-old Hungarian was framed as a battle between the ambition of youth and the experience of age.

As soon as the final set started, Park and Imre traded a point each. With the score at 14-10, Imre needed only a point to conclude the match, and a gold medal in fencing would have eluded Korea once more.

But even though the victory looked improbable and Park was on the verge of losing, he fought through, challenging his opponent by going deep with everything he had and giving a final burst with about two minutes remaining in the bout.

Park then reeled in four successive points, evening out the match 14-14 with just over a minute to go. He then struck Imre explosively, tallying the final point with fleche, his trademark move, ending the match with an unlikely victory.

Park is now the first epee fencer in the history of Korean fencing to claim Olympic gold.

He caught everyone by surprise when he edged the world’s No. 2 player, Enrico Garozzo of Italy, by 15-12 in the round of 16 earlier in the day.

“I am so excited to take my first Olympic medal,” said Park after the match, unable to control his emotions. “[In terms of strategy] the Olympics is a global festival so I just tried to enjoy myself as much as possible.”