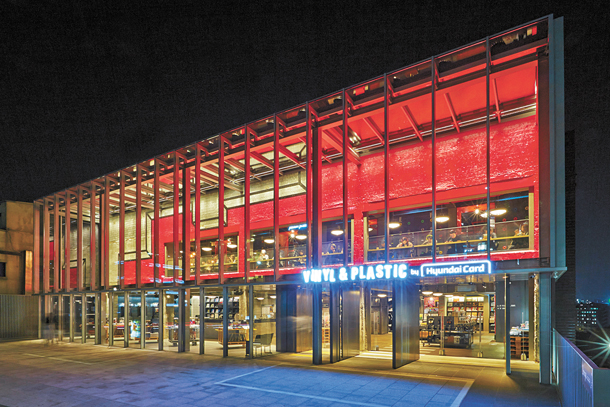 After launching Hyundai Card Music Library + Understage, Hyundai Card has newly opened Vinyl & Plastic in Itaewon, central Seoul, where visitors can listen and buy vinyl records and CDs. It is open to everyone, but discounts are available for Hyundai Card customers. [HYUNDAI CARD]

Hyundai Card is adding new artistic sensibility to Itaewon, central Seoul, once again with its “Vinyl & Plastic” and “Storage” complex.

The space, which opened on June 10, is open to the public but offers some discounts for Hyundai Card customers.

Vinyl & Plastic, which takes up the two aboveground floors, offers visitors the chance to listen and buy vinyl records and CDs. More than just an ordinary shop, it’s a unique space that boasts a retro atmosphere and the opportunity to experience various kinds of music.

Sorted by genre and artist, approximately 4,000 kinds of vinyl records as well as 8,000 kinds of CDs from artists ranging from the 1950s to present day are on offer.

In the “Vinyl 200 Picks” corner located on the first floor, people can play vinyl records by famous artists such as The Beatles, Nirvana, ABBA and Zedd on a turn table. On the second floor, the “Plastic Picks” corner provides a different, more modern experience with its six walls of CDs that visitors can listen to.

Just like Itaewon itself, where diverse cultures freely coexist, Storage will introduce exhibits and projects in various fields of modern art, such as film, architecture and design.

Meanwhile, Hyundai Card has announced a new plan to encourage mutual growth of Vinyl & Plastic and other small and medium-sized record shops.

Regarding the opening of Vinyl & Plastic, Hyundai Card has been having discussions with various record stores.

In the process, Hyundai Card has actively collected shop owners’ opinions and subsequently introduced new policies for Vinyl & Plastic so that it doesn’t take away business from smaller stores.

Vinyl & Plastic won’t sell used records, and the discount rate for Hyundai Card users will remain 10 percent. It won’t directly import records from overseas, and it will also limit its sales of certain records.

The company says it will further develop plans to invigorate the record industry as well as collect opinions of record shop owners regarding its influence in the market.

This is Hyundai Card’s second complex in the area, following the opening of “Hyundai Card Music Library + Understage” in May 2015.

The library also features a retro sensibility where people can escape from their busy modern life to enjoy vinyl record music and books dating back as far as the 1950s. Understage functions as a unique cultural gathering place where innovators in various different art forms can meet and stage new performances.

Admission to the library is restricted to Hyundai Card customers and up to two guests.