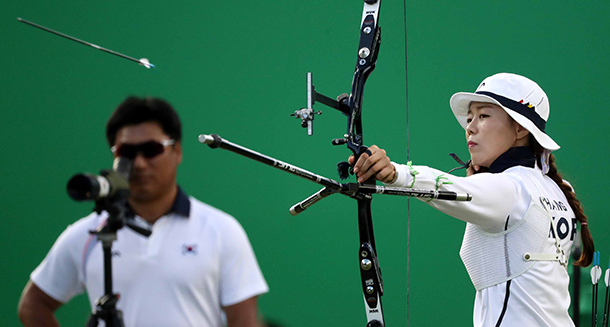 Chang Hye-jin of Korea shoots an arrow during the final of the women's individual event on Thursday in Rio de Janeiro, Brazil. Chang claimed gold from the event while her teammate Ki Bo-bae added bronze. [NEWSIS]

Korea once again proved its dominance in archery, adding two more medals in the sport to its tally on Thursday, the seventh day of the Olympics in Rio de Janeiro.

Chang Hye-jin, a member of the women’s team that made history earlier in the week by claiming an eighth successive Olympic title, won gold in the women's individual event, along the way defeating her compatriot Ki Bo-bae, the title holder from the 2012 London Games, who this time settled for bronze.

Earlier in the day, Chang faced her own team member Ki in the semifinals. For a moment, Chang’s chances at gold seemed to be slipping, when she shot a devastating three with her second arrow in the first set.

With three golds in archery from this year’s Summer Games alone, the sport is one of Korea’s biggest strengths. Chang’s win from the individual event is Korea’s 22nd gold medal in archery, making it the country’s most successful Olympic sport.