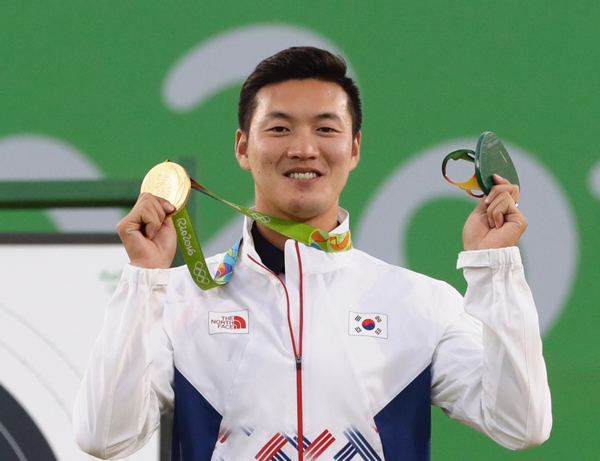 Ku Bon-chan of Korea poses for photo after capturing gold in the men's individual event on Friday in Rio de Janeiro, Brazil.With Ku's gold, Korea has succeeded in its bid for a gold sweep in archery at the Rio Games, an unprecedented achievement since all four archery events, men's and women's individual and men's and women's team, became official medal events in 1988.[AP/NEWSIS]

Korea made history on Friday when archer Ku Bon-chan took gold in the men's individual event on Friday at this year’s Summer Games in Rio de Janeiro, Brazil.

Not only is this Korea’s sixth gold medal at this year’s Olympics, but it is also the 23rd gold from the sport in the nation’s Olympic history. In addition, with Ku taking gold, Korea succeeded in its bid for a title sweep in archery at this year’s Olympics. Korea left no chance for other countries to wear gold around their necks as they dominated from the get-go, taking gold in the men’s and women's team events early in the Games. On Thursday, Chang Hye-jin captured gold in the women’s individual event as well.

No country in the history of the Olympics has had its countrymen take all four golds in the archery events. Archery first became a medal event during the 1972 Summer Olympics in Munich. It featured only the men's and women's individual event as medal opportunities for the sport. Sixteen years later in 1988, team events were added to the list. Since then, while the Korean men’s team has claimed five team titles, the Korean women’s team has yet to concede the top spot, claiming all eight golds for themselves.