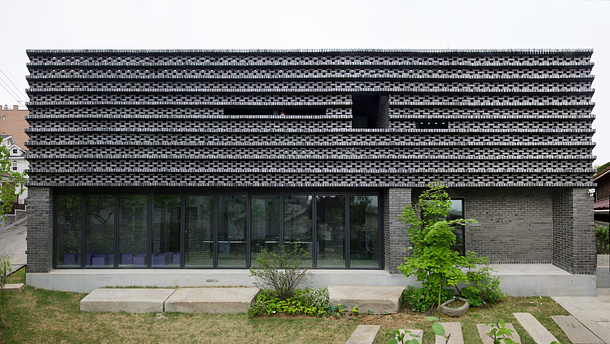 The War and Women’s Human Rights Museum in Seongsan-dong, Mapo District, is designed not to recreate the pain of the victims of the sexual slavery by Japan during World War II, but rather to help their wounds heal. [KIM DOO-HO]

For most Koreans who suffered during Japanese colonization (1910-45), the wounds are still very much fresh.

As a result, it’s never easy for them to revisit the times when unthinkable atrocities were committed, which included rape, torture, mass killing and forced labor.

The same goes for any people who were victims of - or witnesses to - brutality during wars, conflicts, terror attacks and so on.

It seems plausible, then, that when victims of the Holocaust visit the Holocaust Memorial in Berlin, or survivors of the Sept. 11 terrorist attacks go to the 9/11 Memorial Museum in New York, the experience would be like reliving a nightmare.

But rather than reopening old wounds, the spaces are designed to offer visitors an experience that facilitates healing, and perhaps even some kind of closure.

It sounds like a formidable task, but here in Korea, architects Chun Sook-hee and Jang Young-chul are attempting to do just that with a museum dedicated to the “comfort women,” or victims of sexual slavery at the hands of the Japanese before and during World War II.

They wanted the space to be, above all else, one where the women can find peace. But at the same time, they also hoped that visitors to the museum could experience some of the pain, terror and shame the women went through.

It wasn’t easy to create the museum, which is officially named the War and Women’s Human Rights Museum.

Discussions for the space began in 2003 as the victims, many of them over 80, began to pass away. While there were memorials and exhibition halls that deal with the issue in Gyeonggi, Busan and Daegu, none were in Seoul. Many highlighted the importance of the facilities to raise awareness about sexual slavery during the colonial period and to educate younger generations who didn’t live through it.

The largest civic group devoted to the issue, the Korean Council for the Women Drafted for Military Sexual Slavery by Japan, managed to raise 1.7 billion won ($1.55 million) for the construction of a museum, and the Seoul city government promised a plot of land within the Independence Park in Seodaemun District, northern Seoul.

But then came an unexpected roadblock from an even more unexpected group of people.

Former independence fighters and their descendants vehemently opposed the museum being built in the park, arguing that it’s a sacred place for the country’s freedom fighters. They said a museum on sexual slavery would distort the park’s meaning, which is to commemorate the triumph of Korea’s independence movement.

Progress ground to an eight-year halt as the civic group and the independence families battled it out.

The civic group finally relented in 2011, as time was running out with the victims dying at an increasingly rapid rate. By then, the civic group had raised 2 billion won for the project, and it chose a new location in Mapo District - a 330.6 square-meter (3,558 square-foot) plot that included a two-story mansion built during the 1980s - for 1.7 billion won.

“The house was a typical, ’80s-style, handsome-looking house,” said Chun, remembering the first time she and Jang visited, in an interview with the Korea JoongAng Daily.

“What was unique about it, though, was the black bricks that covered the house’s exterior. That’s when we decided to design the museum with black bricks.”

Chun and Jang, who are married and co-founded the firm Wise Architecture, thought the exterior resembled the journey of both the museum and the victims.

While the first thing that’s noted is the bricks’ darkness, the second is their perfect alignment - just as the donations and wishes of so many people led to the museum, and the victims eventually found freedom, albeit of a complicated sort. The architects also said that black bricks have been used in some traditional Korean structures such as the Hwaseong Fortress in Suwon, Gyeonggi.

Still, the challenges were far from over.

“We had less than 400 million won and also we had to renovate [instead of building a whole new structure],” said Chun.

Clockwise from above: Architects Chun Sook-hee and Jang Young-chul; the wall outside of the museum is filled with messages left by visitors; a painting on the museum’s garage door. [WISE ARCHITECTURE, KIM HYUNG-EUN]

The entrance to the museum is confusing, and even feels threatening at points.

Visitors must pass through a heavy, black steel door and walk awkwardly along a gravel-filled road, enduring a cacophony of cannon fire blasts that fill the air. The left wall bears shadows of teenage girls walking with their heads down, while the right includes actual castings of the faces of the victims, now elderly and with their eyes closed.

“We know it’s an unfriendly start,” Chun said. “But we wanted people to experience what the girls would’ve felt when they were taken. Many of them were deceived and didn’t know that they were being taken to frontline brothels.”

Visitors must then go downstairs to a dark room with a low ceiling. It feels like an attic, and it’s designed so that visitors must peek through the walls to see photos of the victims as young women, as well as several art installations. It’s dark and somber, even ominous.

Another set of stairs takes visitors past photos of the victims and comments about their traumatic experiences pinned to rough, unfinished concrete walls.

“If I kept remembering everything [that had happened], I wouldn’t have been able to live at all,” another says.

“The stairs were there in the original building,” Chun said. “We pulled off the walls and there was the rough cement. We left it as it is.”

The stairs lead to the second floor, which is filled with light. Here’s what could be considered a typical museum. The “History Room” is filled with historical objects that evidence Japan’s sexual slavery, as well as newspaper clippings and other documents detailing what the victims and civic groups have been doing to raise attention to the issue.

As architects, Chun and Jang hoped the space would be less archive and more constructed poetry, but they understood that for the Korean Council for the Women Drafted for Military Sexual Slavery by Japan, the museum was a chance to let people know how it had been fighting over the years.

The pair also said hopefully the civic group, which operates the museum, can improve the archive area in the future.

“Once a building is built, you can’t change [the frame],” said Chun. “People can deliberate more on the display and presentation inside.”

(From left) One stairway is surrounded by rough concrete with tiny photographs and messages; the black surfaces in the lobby are engraved with names of those who made donations to build the museumthe memorial wall, where people can pay tributes. Although it’s not the initial design of the architects, it still allows light to penetrate. [KIM DOO-HO];

The next stop is the memorial wall on the second floor balcony. It’s not big, but it is impressively dignified and solemn.

A single layer of black bricks is arranged into a wall, but spaces have been left to allow light to penetrate. Originally, though, Chun and Jang had wanted one more layer of bricks. Chun explained that two layers would’ve further fractured the light, making the space sparkle during the day.

The bricks feature the names of deceased victims, and visitors can place flowers and pay tributes.

After this, visitors go back down to the first floor, which Chun says is the highlight of the museum.

Surprisingly, she’s referring to the humble-looking courtyard. It seems like something found at a grandparent’s house out in the country.

“It’s really not a splendid or well-tended garden. But it’s the yard that the victims would’ve seen in their hometowns as young girls,” Chun said. “The plants are also not rare, precious species, but just wildflowers readily available on Korean hills. But we made sure that the yard can be enjoyed all year around by planting perennial flowers.”vChun and Jang said this is where they hoped the victims could find some sort of peace. But what’s more, they hope the familiar nature of the space presents opportunities for the victims and visitors - who probably have never experienced such suffering - to connect. Its familiarity is something that anyone, comfort woman or no, can relate to.

The civic group also uses the garden to hold events like forums and concerts or gatherings of victims and activists on special days.

Chun referred to the “Memorial of the Deportation” in Paris as an inspiration for the museum. Designed by Georges-Henri Pingusson (1894-1978), it memorializes the 200,000 people who were deported from Vichy France to the Nazi concentration camps during World War II.

“The long and narrow subterranean space simply makes you solemn. You don’t want to run around or make jokes,” she said. The French survivors’ group described the memorial as a crypt, “hollowed out of the sacred isle, the cradle of our nation, which incarnates the soul of France - a place where its spirit dwells.”


Chun said a memorial shouldn’t be a place for recreating the pain in a literal sense.

“When people who haven’t lived the traumatic period go to the memorial and feel something moving within them, some sort of connection to the victims, that suffices,” she said. “A memorial doesn’t have to be grand. Sometimes words aren’t good enough, either. But empathy is all that’s needed to heal one’s wounds.”