Korea’s first animated feature in years is a flop

Korea’s first animated feature in years is a flop 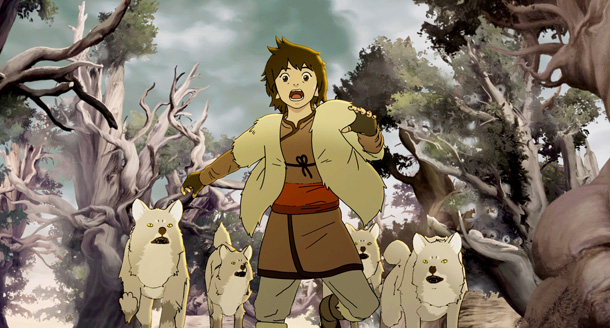 There’s good news and bad news for fans of Korean animation this week.

The good news is that “Kai” was released Wednesday, marking the first time in years that a Korean animated feature, rather than one by Pixar or Disney, hit local theaters.

The film has been generating tons of buzz among animation buffs, as it’s the latest by director Lee Sung-gang, who was behind award-winning animated features including “Yobi the Five-tailed Fox” (2007) and “My Beautiful Girl, Mari” (2002).

It also got attention for having Yeon Sang-ho, the director of the recent smash hit “Train to Busan” and an up-and-coming animator himself, as a producer.

But the bad news is that “Kai” explicitly shows the bleak reality of the country’s film animation industry over its 96-minute run time.

“Kai,” based on the fairy tale “The Snow Queen” by Hans Christian Andersen, tells the story of a little boy named Kai who lives in Mongolia along with his mother and younger sister.

One day, Kai’s sister disappears off a cliff obscured by thick snow when his family attempts to move to a new home during a heavy storm.

Years after the tragic accident, Kai’s village begins to get mysteriously cold. As people try to figure out the cause of the change, Kai encounters the Soul of the River, who tells him he must confront Hatan, the snow queen who is attempting to freeze over the entire world.

“Kai” packages itself as a grand adventure story, but it takes nearly 70 minutes for the boy to hit the road because of the time it spends introducing the supporting characters.

It isn’t always a bad move to focus on characters other than the leads, as cute and zany sidekicks can breath life into animated films — consider the doe-eyed Puss in Boots from “Shrek 2” (2004) — but Lee gives them too much time and too many scenes, resulting in unhelpful distractions from the main storyline.

Another disappointment is the eventual confrontation between Kai and Hatan. It’s supposed to be the highlight of the adventure, but the fight lacks thrills and abruptly comes to an end.

“Kai” will likely remind viewers of the 2013 mega-hit “Frozen” in many ways because the Disney tale of two sisters was also based on the same fairy tale.

With that in mind, director Lee should have come up with a more inventive and unique plot if he didn’t want to be overshadowed by the earlier film.

Despite its elements that will appeal to younger viewers, “Kai” doesn’t offer enough of a story to resonate with general audiences.

The film is rated for all.