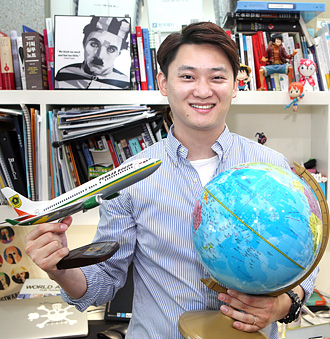 Kim Myeong-jin, the president of CultureGround, plans trips with the words “play” and “sharing” as the core values of his company. Kim said, “I dream of a world full of challenges that are meaningful and fun.” [KIM CHOON-SIK]

The first thing one sees when arriving at the CultureGround office is a large banner with a phrase, “The world is our playground!” The 32-year-old president of CultureGround, Kim Myeong-jin, has an abundance of character figurines from a popular Japanese manga series called “One Piece” on his desk.

“I admire the life that the main character of ‘One Piece,’ Monkey D. Luffy, lives,” says Kim. “Going on adventures around the world, befriending people and making the world a better place.”

The purpose of CultureGround, which was established in March 2012, is vague. CultureGround plans festivals, travel routes and even international exchange events and volunteer programs. Kim describes his company as creating diverse travel programs with the keywords “Learn, Enjoy, Share.”

CultureGround plans trips by forming “Youth Culture Creator” groups that are mostly made up of people in their 20s and 30s.

During a trip in Europe, they opened a Korean food and culture festival in Florence, Italy, and even participated in the Carnival of Venice after learning a traditional Korean masked dance called Bongsantalchum. Earlier this year, CultureGround was invited to Nice Carnival, one of three biggest carnivals in the world, held in France, to perform various Korean traditional dances and songs in the parade.

“We set up an exhibition by splitting the teams and invited instructors to learn various traditional dances like the Korean masked dance,” said Kim. “It’s not simple tourism where we just look around the place but rather a journey that we take so that it becomes a valuable experience in our lives.”

It all began when Kim made a trip to Japan during his college years. “When I went to Yoyogi Park in Tokyo, I saw a Thailand festival being held. The experience was so fresh, seeing a different culture in an unfamiliar city, and I wanted to plan these kinds of festivals myself.”

After graduation, Kim began to plan trips and festivals through his internet blog. At first, it was a small group composed of five to six people but each year, the number of participants increased. CultureGround was able to host a variety of events in 40 cities of 17 countries with 1,067 people.

CultureGround also hosted a donation party to build a children’s library in Nepal and held a debate in a rural school in Indonesia in which its teachers discussed how to improve the local education environment.

The cost of the programs created by Youth Culture Creator is covered by its participants. Some might question the value of a program in which participants need to pay for flights, accommodations and plan various events, but many who have experienced it have expressed a desire to return and take part-time jobs to reapply for new programs.

“I think the satisfaction mostly comes from recklessly challenging something and coming out with the results you get,” said Kim. “When we went to the Nice Carnival, a lot of foreigners marveled at hanbok, traditional Korean attire, saying how beautiful it is, and some Koreans who lived there thanked us for going so far. It was one of the proudest and most fun moments in my life.”

On Kim’s business card, his nickname is written as “beRealism.” According to Kim, beRealism signifies his desire become “a person who turns imagination into reality.” Kim added, “We want to plan programs outside cultural exchange activities, such as ecological trips or public service trips to expand our initiative of changing the world.”