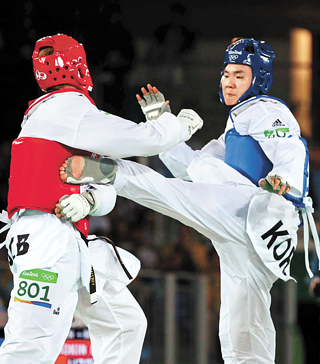 Korea’s Cha Dong-min, right, fights Uzbekistan’s Dmitriy Shokin in the bronze medal match on Saturday. Cha and the rest of the taekwondo team raked in five medals in total - two golds and three bronzes - for Korea at the Rio Olympics. [NEWSIS]

Korea’s national taekwondo team went to this year’s Summer Olympics in Rio hoping to end the nation’s decline in the sport, which has been continuous since taekwondo became an official medal event at the 2000 Sydney Olympics.

They did just that, with all five members ending the Games with a medal, bringing glory back to the birthplace of their martial art.

The taekwondo events took place during the last few days of the Olympics. On the opening day of the taekwondo competition on Wednesday, it was Kim So-hui in the women’s 49-kilogram (108-pound) category and Kim Tae-hun in the men’s 58-kilogram category that brought in the first medals. While Kim So-hui routed Serbia’s Tijana Bogdanovic in the gold medal match with a final score of 7-6, Kim Tae-hun won bronze by defeating Carlos Navarro of Mexico 7-5.

The next day came Lee Dae-hoon, a Korean title favorite who sought to complete his career grand slam in Rio. It was the last piece of the puzzle, which involves the title from four major tournaments: the Asian Games, World Championship, Asian Championships and the Olympics. Gold had eluded him during the 2012 London Games, where he took silver, and Lee hoped the results would be different this time around.

But to everyone’s surprise, Lee suffered an upset loss in the quarterfinals and eventually had to settle for bronze.

Ahmad Abughaush of Jordan brought down the Korean 11-8 in the men’s 68kg competition at Carioca Arena 3 on Thursday. After the unexpected loss to Abughaush, a dark horse who is ranked 38 spots below Lee at 40th, Lee had to resuscitate his chance at the podium through the repechage stage. He did just that, and eventually took down Belgium’s Jaouad Achab 11-7 during the bronze medal match to climb the podium.

Although the color of his medal wasn’t what he’d wanted, Lee demonstrated a level of maturity that gained the applause from the arena after his loss to Abughaush.

After the match, Lee rose the hand of his opponent, commending the Jordanian for his victory.

“When a loser can’t accept the defeat, then the winner won’t be able to enjoy his victory,” Lee was quoted as saying by Yonhap News Agency. “But if the loser accepts the result, the winner can enjoy it even more. I thought it was all part of good sportsmanship.”

The next day, Friday, Korea added another gold to its tally when Oh Hye-ri, a veteran of the team at the age of 28, defeated the French player Haby Niare in the final bout of the women’s 67-kilogram event 13-12 to top the podium.

“I don’t have to fight in another match right?” said Oh after the match with a big smile on her face. “I have already done my best but there were times when I had to endure through disappointment. I did my best again today and I am happy about the process as well as the result.”

Since the sport became an official Olympic event, Korea has claimed at least one medal in the women’s 67-kilogram category, and the pressure was high for Oh not to disappoint. But now, with Oh becoming the oldest taekwondo practitioner in Korea to earn an Olympic medal, the legacy continues.

Oh was followed by Cha Dong-min, the last player on the team, in the men’s 80-kilogram event. Cha, another gold hopeful, lost during the quarterfinals and took a shot at bronze after salvaging his chance through repechage.

In the bronze medal match, regulation wasn’t enough for Cha and his opponent Dmitriy Shokin of Uzbekistan to settle the score. The two fighters went into the sudden-death round, during which whoever claims the first point takes the match. Cha eventually defeated Shokin with a kick to the body, adding Korea’s last medal for this year’s Summer Games.