‘Thaad is not about choosing between the U.S. and China’

‘Thaad is not about choosing between the U.S. and China’ 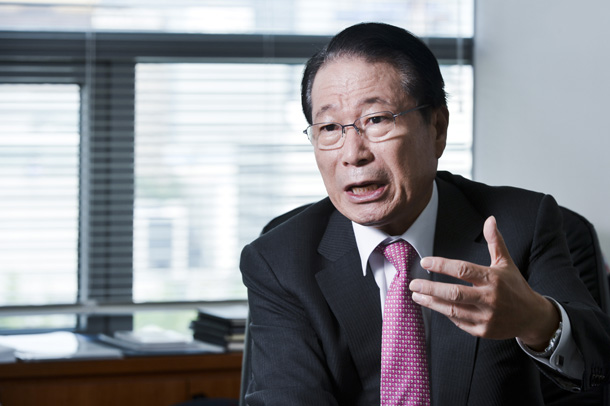 Former Foreign Minister Yu Myung-hwan points out the importance of catering to the individual needs of surviving victims of Japanese wartime sexual slavery, since what they want from Tokyo’s fund varies from person to person.

The 70-year-old chairman of the Sejong University Board of Trustees sat for an interview with the JoongAng Ilbo on Aug. 17 in his office in Gwanghwamun, central Seoul, near the Ministry of Foreign Affairs, and weighed in on the Dec. 28 comfort women agreement, Korea and Japan relations and other key diplomatic and security issues.

Yu recently served as the civilian chair of the preparatory committee for establishing a Tokyo-funded foundation, a key component in implementing the breakthrough bilateral agreement last year to resolve the issue of Japan’s recruitment of women into sexual slavery before and during World War II.

The Reconciliation and Healing Foundation to support these Korean victims, euphemistically referred to as comfort women, was launched in Seoul at the end of last month.

On Dec. 28, Korea and Japan’s foreign ministries struck a deal to resolve the comfort women issue, which has long been a thorn in both their sides. The deal included an apology from the Japanese prime minister and a plan to establish a fund for the victims, using 1 billion yen ($10 million) to be taken from Japan’s state budget.

Yu admitted that he had been asked to become chair of the foundation, but he had said that a civilian would be better suited for the job. He also pointed out that a woman might be better at reaching out to the victims and drawing out their continued support in the road to their healing.

The career diplomat joined the Ministry of Foreign Affairs in 1973 and served as top Korean envoy to countries like Israel and the Philippines. He was posted as ambassador to Japan between 2007 and 2008 before he served as foreign minister from 2008 to 2010 under the President Lee Myung-bak administration.

He still keeps active in the diplomatic arena and often gives advice to the Korean Foreign Ministry. Yu visits China at least once a year even though his line of work as a diplomat had been largely with Washington and Tokyo.
The following is an edited excerpt of the interview.

Q. The deal between Korea and Japan was reached quite abruptly.

A. No matter how much the comfort women issue is discussed at the government official level, a resolution is impossible. This is because there is a difference in our fundamental positions. In a way, the Dec. 28 agreement can be seen as a political solution. As is, we found a line where while we cannot be 100 percent satisfied, we can accept it. Though the format of the negotiations was between our two countries’ foreign ministers, we have to see it as a political deal struck between our leaders. It was a political decision reached by taking into consideration that if the comfort women issue continued to be left in an unresolved state, it would have remained an obstacle between Korea and Japan, which would not be good; also, it would be better for the elderly victims to receive monetary support and another apology from the Japanese prime minister to help heal their hearts before they pass away.

Civic organizations have expressed disappointment with the deal.

While organizations supporting comfort women victims may speak out in opposition of the agreement, that their efforts beyond that to block the foundation from functioning at all raises doubts as to whether this is really for the victims or a humanitarian act. I think we need to recognize the role that civilian organizations played in the comfort women issue.

Why have representatives of civic organizations not been included in the board of directors of the foundation?

The board is slotted for 15 members, but currently 10 have been appointed. We are continuing to try to convince scholars who have opposed [the deal] or civic organizations to take part.

Has the board met with all the survivors?

I am aware that of the 46 survivors, 37 of them have been contacted. Most of them we met with in person, while some were reached by phone or through family members. Of these, over 80 percent were in favor [of the foundation].

The three survivors who reside with the Korean Council for the Women Drafted for Military Sexual Slavery by Japan could not be contacted, though the survivors at the House of Sharing were reached.

That was a pity. Even if they are opposed to the founding of the foundation, we can still meet freely… and listen to the opposing opinions. But not being able to make contact at all is a bit disappointing.

We already heard from 37 elderly victims. Some need monetary support right away, some want the Japanese prime minister to write a letter of apology, another victim wants to create a scholarship for her grandchild before she dies…This cannot all be done at once and [the requests] are all different, so we must customize the support.

Though there are projects mentioned in the Dec. 28 agreement, using too much money on this is not right… A memorial facility or park will only use a portion of the entire fund, and I think it will be reasonable for the rest to be used to support individual needs.

Japanese media has reported that such support will not be in the form of individual cash support.

This is based on the fear that if the money is divided equally among [a variable number of victims], the money will go to those who are opposed to the deal. Thus, the director general has negotiated to provide support based on the need of the victims.

What about the issue of the comfort women statue in front of the Japanese Embassy in Seoul, which Tokyo wants removed?

Korea and Japan clearly negotiated [to use the fund] to achieve the goal of restoring the dignity and honor of the victims. If it is based on a prerequisite involving the comfort women statue, there could be the misunderstanding that Japan is paying for its removal. This will in itself damage the moral basis of the agreement.

Of course, the agreement contains wording other than “removal,” and the government will make effort to talk to the civic organization that erected it, but that is as is. [The removal of the statue] cannot be promised, because it was placed there by civilians. If comfort women victims say, ‘that is enough now,’ then that will be resolved in the next stage by the wish of the survivors.

How do you see Korea-Japan relations going in the future?

Over the past 50 years, we have been pulled along in a victim-assailant paradigm. We could say whatever to Japan, and Japan always had to listen to us and apologize… But we needed each other during the Cold War regime, and the United States also played a large role. But through the 50th anniversary of normalization of bilateral ties [last year], the paradigm has changed a lot; there has been a shift in the balance of power, the rise of China, Korea’s economic development, a transition of generations and a new generation of those who do not speak Japanese.

As one of the few friendly nations in the region that share universal values such as democracy and rule of law, we need to think about what we can do for peace in Northeast Asia and the world. If we do not pull Korean and Japanese relations forward, a future-oriented relationship will be difficult.

Korea has pulled forward Seoul-Tokyo-Beijing relations considerably. We also need to escape from the victim-assailant paradigm. Young people here do not have such feelings toward Japan, and such prejudice has also been diluted among Japanese youth.

How do you perceive the controversy over the deployment of the Terminal High Altitude Area Defense, or Thaad, system in Korea?

In accordance to the SOFA (Status of Forces Agreement), the U.S. Forces Korea is placing an air defense artillery battery for protection against North Korea’s nuclear and missile threats. Other meanings or intentions should not be added to this, but the issue is snowballing.

A radar similar to the one that will be deployed in Seongju [in North Gyeongsang] is already placed in Hokkaido and Okinawa. Overly cautious negotiations [with Washington] have aroused misunderstanding, and provided China a pretext to become involved in the issue.

It seems as if the deployment of the Thaad system has become an issue of choosing between the United States and China.

This is wrong. If the U.S. Forces Korea continue to think its troops stationed here need Thaad, we cannot opposed it. It is unthinkable for the U.S. troops to be defenseless against enemy threats.

Isn’t there a way to appease China?

Our government has tried hard to negotiate over the technical issues. We have proposed to limit the scope of the Thaad radar to under 600 kilometers (373 miles), and such negotiations over these technical aspects were proposed multiple times, not just between Korea and China but between Korea, China and the United States. But China has said it was not needed, that it knows everything and is unconditionally against it.

Does China have some other intention?

I suppose that China suspects that this is the first step for Seoul to take part in a missile defense system between South Korea, the United States and Japan. Recently, Vice Admiral James D. Syring, director of the U.S. Missile Defense Agency, visited here and publically said that this is separate from the wider [American] missile defense system, and is a response to North Korea’s missiles. Our high-ranking government officials have said that once the North Korean nuclear and missile issue is resolved, there would be no need for Thaad. For us, this is an exercise of our sovereignty to protect our country, and it is difficult to understand why China is opposing it so excessively.