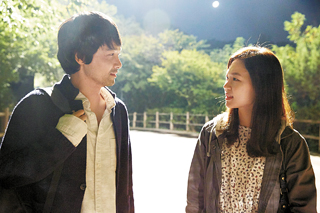 On a hot summer day, Eun-hee (Han Ye-ri) meets a Japanese writer (Ryo Iwase). He asks her for directions and they eventually start a conversation. Even though communication is difficult due to the language barrier, she feels quite comfortable talking to him.

Then, she moves to Mount Namsan in central Seoul, where her boyfriend Hyun-o (Gwon Yool) is shooting a drama.

At the same time, Un-cheol (Lee Hui-joon), a man she met a long time ago, sees her Twitter feed and goes to the same spot, hoping to meet her.

These three different men make her day increasingly complex. She takes on a different persona depending on who she is with, yet these are all based on lies. Nevertheless, she does her best to maintain the relationships with the three men. It seems unlikely, however, that things will turn out the way she wants.

Seochon, central Seoul, has been chosen as the main stage of the film where all these relationships are constructed and broken.

The entire film takes place over the course of just one day. Within 24 hours, she shows multiple sides of her character, which was the goal of director Kim Jong-kwan. Kim thinks that all human beings have many characters in them and that each one comes out in different situations.

When the lights are out, the ghost appears and when the lights are turned on, it suddenly vanishes. Even though it looks simple to escape from the apparition, it knows how to manipulate situations to its own advantage.

Rebecca and Martin witness an eerie woman in a room without lights on, who later is known to be Diana, a childhood friend of their mother, Sophie. She met Diana in the hospital when Sophie was hospitalized for mental illness and depression. This ghost does not seem to want to leave the family alone, being strongly attached to Sophie.

The film was born out of a two and a half minute clip of the same name directed by David F. Sandberg. The popularity of the short film led to the opportunity to expand it to the 81 minute full-length feature. The director worked on developing the characters and the script. There are now even more scenes with ghosts popping out of nowhere, which keep moviegoers on edge from beginning to end.

The film is produced by James Wan, the maestro of the horror flick, who has been widely loved by moviegoers in films such as the “Saw” series and “The Conjuring” series. The film captivates moviegoers who will not know where the time has gone. 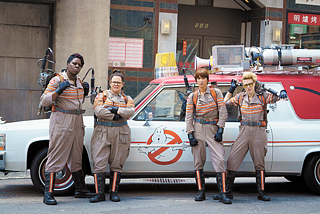 This reboot of the “Ghostbusters” franchise that began in 1984 has been met with a warm welcome from fans of the original and the sequel, released in 1989.

The Ghostbusters are professional ghost catchers in New York City. Abby Yates (Melissa McCarthy), a specialist in paranormal phenomena, Erin Gilbert (Kristen Wiig), a physicist and Dr. Jillian Holtzmann (Kate McKinnon), a weapons engineer, have gathered to run a company that barely has any business.

One day, they receive a report that ghosts are appearing in the middle of the city. With newly employed Patty (Leslie Jones) and Kevin (Chris Hemsworth), they are ready to get rid of the ghosts.

Science and ghosts seem incompatible, but with this eccentric combination, the film has hit a note with audiences. Hemsworth has transformed his signature style from the strong, manly titular character in “Thor” to a silly but attractive foil that will surprise many people.

Not only did Director Ivan Reitman of the original film join as a co-producer with Amy Pascal, but several members of the first film make cameos, including Bill Murray and Dan Aykroyd. 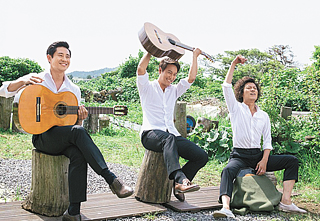 There comes a time when everything in life becomes boring, and all you want to do is quit and get away from it all.

Friends since their days in university, the three strongly believed that after several years of working and studying, they would be well off, but the reality is that they are still struggling in their day-to-day lives.

Jung-pil lives alone, and because he has no family to support, he is placed first on the list for voluntary retirement at his company. Su-tak hopes to become a famous lawyer, but is still chasing his dream despite years of preparing. Eun-dong is a leading anchor but he has unspeakable worries that he is burdened with.

One day, the three men find themselves on Jeju Island after the death of the father of a former classmate. The unexpected “detour” in their life has only just begun.

The characters share the struggles of many in the present generation, who are too busy working towards an uncertain future to relax and enjoy some leisure time.

The beautiful island setting heightens the festive mood of the film, and the emotive palm trees stretched alongside the roads bring great pleasure to whoever sees them.

On a restless summer day, the film provides a relaxing break for filmgoers looking for a way to escape their hectic daily lives. 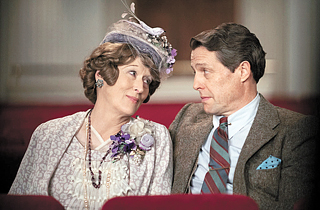 With one percent talent and 99 percent self-confidence, Florence Foster Jenkins, played by Meryl Streep, declares that she will perform in Carnegie Hall.

This is a shocking anouncement as Jenkins is a poor singer.

Her husband and manager, St. Clair Bayfield, played by Hugh Grant, and her pianist Cosme McMoon, played by Simon Helberg are embarrassed by her ambitious goal, but they are ready to fully support her in her attempts to go to Carnegie Hall as a soprano.

Jenkins loves music and is passionate for it, but she cannot sing well, which she does not realize at all. This is due to Bayfield’s hard work and effort - he did not allow people who would condemn her come to see her perform, and he threw all the newspapers away that sharply criticized her.

The film is based on the real story of Jenkins (1868-1944) who aspired to be a singer although nobody imagined she could become one. Despite this, she had the passion to achieve her dream and, even today, people still recall her and her life. The French film, “Marguerite” (2015) also got inspiration from Jenkins’s life to create a similar story, though with a darker tone.

Streep can sing well, so for this role, she had to practice singing as awfully as possible, which ironically was a big challenge for her.

The film delivers the message that nothing is impossible and that in order to make your dream come true you need the belief and encouragement of others.

The infection may have started in Seoul Station, but in an instant, a zombie virus has spread throughout South Korea and jeopardizes the entire country.

On the day it happened, nobody noticed anything wrong when a homeless person in the station started acting a bit strange, stumbling and squeaking. Some of the people that do notice include a runaway girl, her boyfriend and her father, who soon find themselves in the middle of an impossible situation.

The film is the prequel to Korea’s first big-budget zombie movie “Train to Busan,” which was also the first live-action film by director Yeon Sang-ho. “Train to Busan” has sold more than 10 million tickets, so many moviegoers will likely look forward to this latest film, which explains how and why a zombie girl hops on the train headed south.