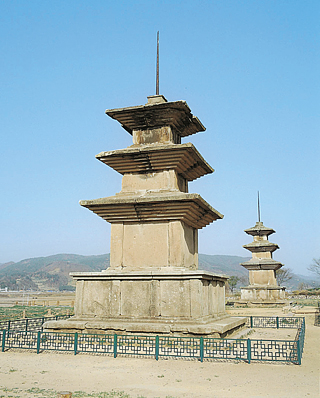 These twin pagodas, standing on a site that once housed a historic Buddhist temple named Gameunsa, feature stone structures each of which consists of a double-tier base supporting a three-storied body.

The pagodas show that Gameunsa is one of the first Silla temples that adopted a new architectural system established directly after the unification of the three ancient Korean kingdoms in the 7th century wherein a temple had two pagodas in its precincts.

Before the unification, Silla temples had only one pagoda in their grounds.

The Silla rulers’ yearning for the protection of their kingdom from foreign enemies is reflected on the twin pagodas’ imposing figures.

One of the characteristic features of these pagodas is that, unlike most other stone pagodas made in the same period, each story is built by fitting a multiple number of stone blocks together.

These are the largest stone pagodas to have survived in Gyeongju today and are widely admired as majestic figures soaring high on a raised land against the East Sea.