Stielike suits up to face China

Stielike suits up to face China 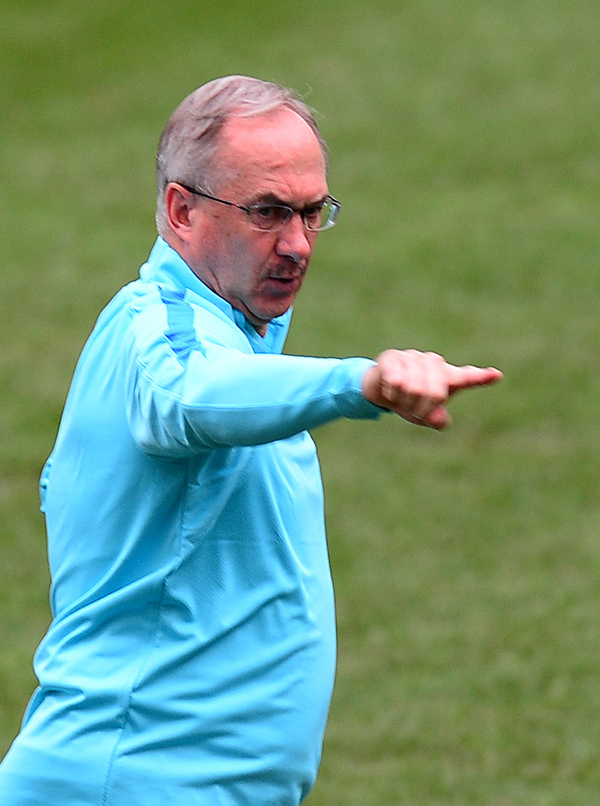 En route to the 2018 Russia World Cup, Korea kicks off the final regional qualifiers today against China. While the general consensus is that Chinese side should be easy prey for Korea, Uli Stielike, Korea’s manager, begs to differ. The skipper expects the upcoming qualifying matches, including today’s against China, to put him to the test and truly weigh his competency as a football tactician.

Sept. 5 marks the second anniversary of Uli Stielike assuming the top post with the Korean national football team. Without a doubt, it was a decorated two years, finishing as runner-up at the 2015 AFC Asian Cup and winning the 2015 EAFF East Asian Cup. Last year, the skipper led the team to win an astonishing 80 percent of its games, conceding only one match while winning 16 and tying three. They concluded the second round of the Asian qualifiers for the 2018 World Cup with a perfect record, yielding no goals throughout the round.

But still, some critics say Stielike has yet to meet his match as most of the games he’s seen since coming onboard were against second-rate Asian teams. For this season, it is expected that the skipper will finally be put to the test starting today as the team starts its final quest to the World Cup. Other than China, Korea, ranked 48th in the world according to the FIFA rankings, will meet Iran (39), Uzbekistan (55), Qatar (80) and Syria (105) along the way.

If Korea comes out of the final round as the winner or runner-up of Group A, it will automatically gain berth to the 2018 World Cup. If it finishes the group in third, Korea will play a playoff round against the third-place team of Group B, after which it would have to compete for a spot with the team that placed fourth in the Confederation of North, Central American and Caribbean Association Football (Concacaf) qualifiers.

Meanwhile, there are two things that Stielike must demonstrate in order to silence his critics: leadership and tactical prowess.

If the past record is any indicator - with 16 wins, 12 draws and one loss - Korea is expected to emerge with an easy win. Added to the pressure is the fact that the team is going into today’s match with only three days of preparation. And this is where Stielike’s leadership really kicks in. He must put the scattered pieces together quickly and send a solid squad onto the pitch tonight. “We had only three days of training together, but there is not a thing to worry about,” he said on Monday. “We will look as if we’ve trained together for three months.”

But will it? All the players are joining from different leagues and teams around the world and while Stielike used to be a star player in his heyday, playing for elite teams like Real Madrid, he is yet to have had notable success as a manager, which again raises skepticism as to whether he is capable of leading a team off the field.

How well the players will executive Stielike’s tactics is another concern. Since he came aboard, the skipper has tested and played different players from various leagues. But some cogs in the machine have yet to be thoroughly oiled - most notably, defense. After Cha Du-ri, a fullback, retired, Stielike has yet to find a defender to fill this void. Jang Hyun-soo has emerged as the clear option but he is not a fullback per se, but rather a central defender. Fullbacks such as Kim Jin-su of German Bundesliga club TSG Hoffenheim can be opted to replace Cha but Kim sees little to no playing time at his club, something that goes against Stielike’s instincts when choosing players.

Surprisingly, Stielike has set his squad with 20 men, rather than the regular 23. Furthermore, the team will have move ahead without Son Heung-min of Tottenham Hotspur during the match against Syria on next Tuesday, as Son has to go back to England to join his club.

“Stielike has not had a proper opportunity to face strong opponents,” said Lee Chun-soo, a retired national forward and football commentator for JTBC3 FOX Sports. “The final round of regional qualifiers will provide an opportunity for the skipper to show us what he’s made of.”

“China is not an easy opponent,” said Stielike. “There is no such thing as an easy win. We have to play high level football to win. The thing about football is there are always different variables that could go wrong.”

But China is ready for the game, it seems. The Chinese football association delayed the schedule of the Chinese Super League to fit the qualifiers match into the players’ schedules, and they sent the squad on a chartered plane. Nearly 30,000 Chinese fans are expected to be at the venue tonight to root for the team.

Tonight’s match against China kicks off at 8 p.m. and JTBC3 FOX Sports will air the match live.