Match against Syria isn’t in the bag just yet

Match against Syria isn’t in the bag just yet 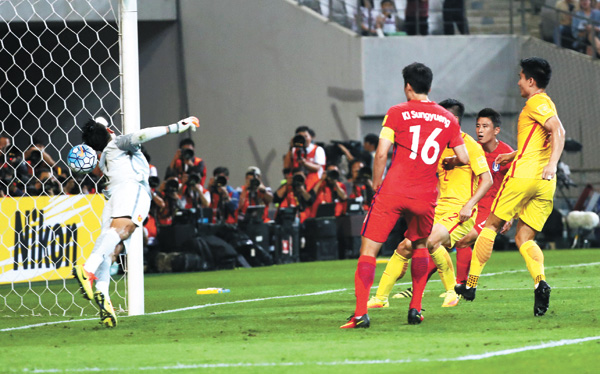 Goal! - Korea scores against China on Thursday at Seoul World Cup Stadium in western Seoul. Thursday’s game was the first match in the final round of the Asian regional qualifiers for the 2018 World Cup. The next match for Korea is against Syria on coming Tuesday at Malaysia. [YANG GWANG-SAM]

The show has begun. With the first match against China behind them, Uli Stielike and the Korean national football team will be travelling to Malaysia to take on Syria this coming Tuesday as they aim to qualify for the 2018 FIFA World Cup in Russia.

The game against Syria is the second match of the final round for the 2018 World Cup qualification - Asian Football Confederation (AFC), which is scheduled to go from September 2016 to September 2017. Syria is currently in a civil war so it is in no position to host a football match, which is why the venue was initially set for Beirut, Lebanon. 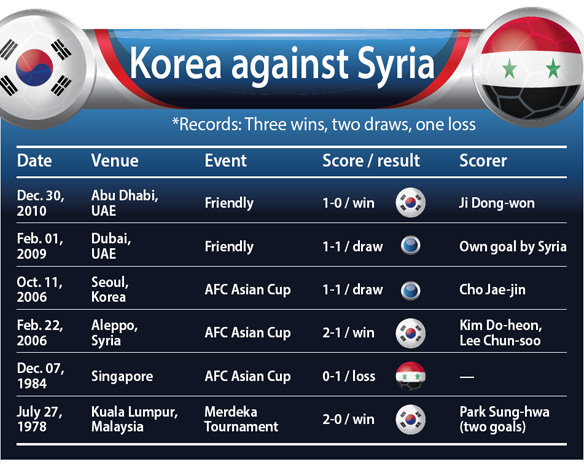 Safety concerns came to the surface once more, however, forcing the football associations of the two countries to find an alternative venue in Macau. But this was dashed again when Syrian Football Association and its Macau counterpart could not reach an agreement on terms and conditions. After webs of complications, the venue has finally been set as Tuanku Abdul Rahman Stadium in Seremban, Malaysia.

For Korea, ranked 48th in the latest FIFA standings, Syria, No. 105, which is the lowest of the teams in Group A, poses no threat. Vis-a-vis Korea, Syria is at a disadvantage with one win, two draws and three losses, not to mention the Middle Eastern team has never qualified for the World Cup before. But Korea cannot let its guard down since anything could go wrong in a game of football.

For one thing, anyone can see that Syria is in an upward trajectory looking at the second round of the Asian qualifiers. Assigned to Group E along with Japan, Singapore, Afghanistan and Cambodia, Syria came out of the group as its runner-up after the Japanese outfit with six wins and two losses. Its two losses came only from the matches against Japan. Against the rest of the three countries, Syria claimed wins in every single game, some winning by as many as six goals. Quite an unexpected result, but it was apparent that the Syrian football team has stepped things up a notch. The driver behind Syria’s success is its explosive goal-scoring capability. The team piled in 26 goals total in eight games, only one shy from the number of goals that Japan scored. Omar Khribin is the ace and center of Syria’s attack, scoring five in the second round and 13 total for the Syrian national team. He is the public enemy No. 1 to contain for Korea next Tuesday.

While many believe that Syria will be easy prey, the fact that Korea has never defeated Syria by a large deficit is alarming. Its 2-0 win in 1978 is the best Korea has done against Syria. Since then, Korea could not widen the gap by more than one goal. More importantly, Korea should not neglect the fact that Syria actually did bring Korea to its knees once. In the AFC Asian Cup in 1984, Syria edged Korea 1-0, an upset as unexpected as any. Just looking at the past numbers alone, it would seem as if there is a jinx for Korea when it comes to playing against the Middle Eastern squad.

Stielike and his players will be up for the task to put an end to this jinx on Tuesday. Fans expect Korea to net goals left and right and crush Syria to prove its dominion once and for all. Although Korea’s ace offensive midfielder Son Heung-min will be absent as he left after the match against China to join his English club, Tottenham Hotspur, Stielike still has more than enough talents to utilize up front.

In the final round, six teams in each group are to play home-and-away round-robin matches. By next September, the winners and runner-ups in Group A and Group B, or four teams in total, will gain a berth the World Cup, while third-place teams will have to take a detour to reach the World Cup. They will play a playoff round and the winner from the round will then compete for World Cup spot with the team that places fourth in the Confederation of North, Central American and Caribbean Association Football (Concacaf) qualifiers.