Korea shuts down China in a neck-and-neck bout

Korea shuts down China in a neck-and-neck bout 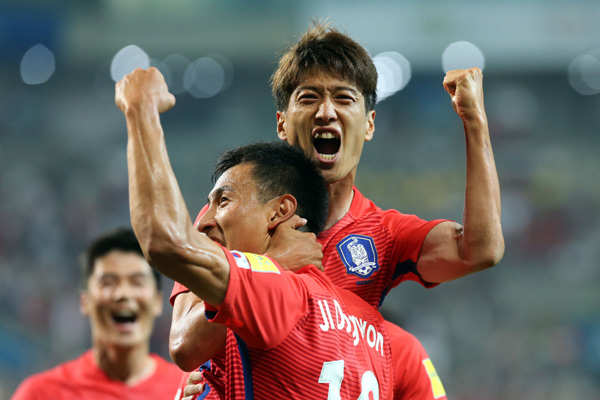 Korea’s Lee Chung-yong and Ji Dong-won celebrate a 3-2 win over China in the first match of the final round of the Asian qualifiers for the 2018 World Cup. Ji tallied two assists for Korea while Lee scored a goal with a brilliant header.[KANG JUNG-HYUN]

Korea edged China in a narrow 3-2 win, starting the final round of the Asian qualifiers for the 2018 Russia World Cup on an auspicious note.

In the first match of the final round on Thursday at Seoul World Cup Stadium, 48th-ranked Korea took down No.78 China, despite the visitors’ late run.

The match between Korea and China garnered attention even before it began, as it was expected that as many as 30,000 Chinese fans from China as well as here in Korea were to attend the match. Upwards of 51,000 people made their way to the stadium, and nearly half the seats were filled by Chinese fans decked out in yellow, their team color.

Korea, looking to go for its ninth straight World Cup, started out with Ji Dong-won as center forward. Putting Ji up front turned out to be a brilliant choice by Uli Stielike, as two of Korea’s goal this day came bounding off his foot.

The first goal came at the 20-minute mark when, during a set piece play just outside the Chinese penalty box, Son Heung-min’s free kick was deflected off China’s Zheng Zhi and went in. The Korean side went to the board again to double the lead in the 62nd minute when Lee Chung-yong scored a brilliant header off Ji’s cross. Lee’s header went to the far side of the goal post and China’s goalie, Zen Cheng, couldn’t react in time. Koo Ja-cheol, a midfielder from FC Augsburg, quickly added another goal three minutes later when Ji nudged the cross by Son with his heel to place it in front of Koo.

But the later part of the second half was lopsided, as China made a late attempt to narrow the deficit, and succeeded as they scored two back-to-back goals in, again, a three-minute span. Most notably, Hao Junmin curled in a sharp free kick in the 76th minute to net it at the top-left corner of Korea’s goal. Still, their effort was for naught as Korean goalie Jung Sung-ryong rejected what could have been the equalizer with a brilliant save.

Korea maintained a slim lead, without much room to breathe, right to the end of the match.

Although Korea’s clean-sheet streak, which it waved through the second round of the qualifiers, will not be extended to the final round, nevertheless Stielike remained optimistic about the match overall and said, “We learned what we need to improve.”

About ending the clean-streak run, Stielike said it relieved the team of the pressure of continuing that record, and now they can bear down and focus on winning.