After a rough spell in Japan, Van Hekken is back and better than ever

After a rough spell in Japan, Van Hekken is back and better than ever 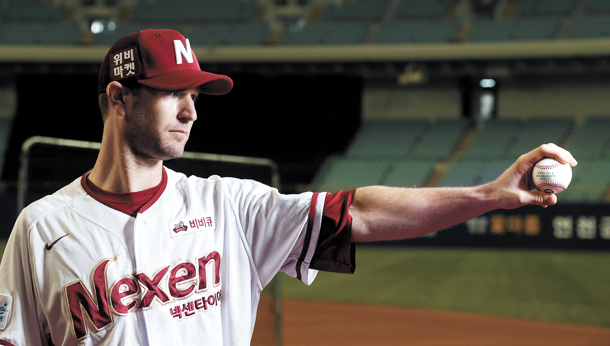 Andy Van Hekken is back with the Nexen Heroes after a brief stint in the Japanese Nippon Professional League. [KIM SANG-SEON]

Andy Van Hekken of the Nexen Heroes is back after a brief departure to try his arm in Japan.

Van Hekken played for the Heroes from 2012 to 2015, during which time he earned himself a reputation as one of the team’s most reliable pitchers. Although not a flashy pitcher, he is known for having a reliable arm and threw five to six innings per game as a regular in the starting rotation.

Fans thought, or at least hoped, that he would retire with the Heroes. But he left the Heroes after Saitama Seibu Lions doubled his annual salary before this season. However, he struggled in the Nippon Professional League (NPL) after suffering a shoulder injury. Now, the prodigal son has returned, ready to make up for the part of the Korea Baseball Organization (KBO) season that he’s missed in the upcoming playoffs.

“I was not able to enjoy the ball game in Japan,” said Van Hekken when JoongAng Ilbo met him at the Gocheok Sky Dome, the Heroes’ home ballpark. Indeed, his record from NPL speaks for itself. While pitching in 10 games, he recorded four losses and his earned run average (ERA) stood at 6.31, which is in stark contrast to his performance in the KBO, where he pitched in 120 games to tally 58 wins, 32 losses and 3.54 ERA.

The American pitcher did not hesitate for a second when he was called back by the Heroes. The thought of coming back to Korea was already at the back of his head, according to Van Hekken. “Park Dong-won (Heroes’ catcher) was sitting next to me,” he said. “I felt relieved having my old teammates at my side.”

Since Van Hekken came back to the KBO, he has been dominating the mound, already pitching in seven games and tallying five wins, with no losses. It was as if he wanted to demonstrate his gratitude to the Heroes’ fans and the coaching staff who welcomed him back with open arms. His ERA stands low at 2.14 right now.

When asked why he thinks he struggled in Japan, he discussed the difference between the Korean league and the Japanese league and said he explained to his team in Japan what he thought to be the best way to remedy his shoulder, but the team wasn’t willing to listen to him. The American pitcher said he just could not enjoy the game. Once he came back to the Heroes, he was able to work closely with the staff to take care of his shoulder.

But when asked whether it is the notable discrepancy in the level of game played between Korea and Japan, he disagreed, saying, “It was because of my physical condition that I struggled in Japan.”

When the Heroes brought Van Hekken back from the Seibu Lions, the KBO club only promised him an incentive of $100,000 without a guaranteed annual salary. While he might have been disappointed, the 37-year-old American pitcher said he did not look at money-related matter in his decision to return to the Heroes.

The batting lineup of the Heroes has been thinned in comparison to past seasons, when Van Hekken played alongside Park Byung-ho and Kang Jung-ho, both of whom joined Major League Baseball teams. Still, Van Hekken says the strengthened pitching lineup can carry the team once the postseason comes along.

Fans call him ‘Van the public official,’ a reference to his consistent and reliable pitching style. The American smiled and said the nickname fits the style he aims for, which is characterized by stability. Yeom Kyung-yup, the manager of the Heroes, says Van Hekken is the pillar of the Heroes, while Son Hyeok, the Heroes’ pitching coach, says Van Hekken is the textbook example of how starting pitchers should play. They credit Van Hekken’s ability to control the pace of the game with different types of balls.

“I want to pitch as long as I can be of help to the team,” Van Hekken said. Pushing 40, he does not feel old just yet, although he doubts he can go until he is in his 50s.

With Van Hekken in the starting lineup once more, the Heroes, who are maintaining their position at third in the KBO standings, will go into the postseason with that much more to offer to fans.