‘The Final Boss’ and his unreadable pitches

‘The Final Boss’ and his unreadable pitches 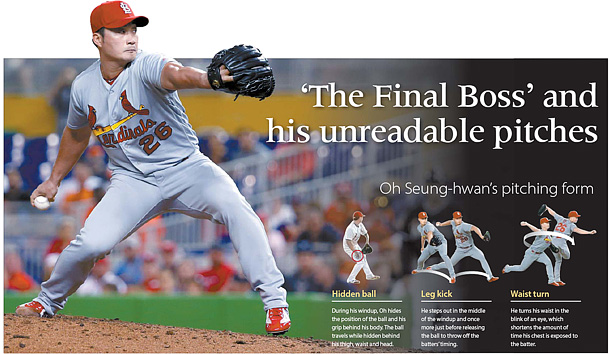 Oh Seung-hwan of the St. Louis Cardinals has already locked down 15 saves since he took over the closing assignment after All-Star closer Trevor Rosenthal was removed from the position in late June when his earned run average hiked to 5.63. “The Final Boss” is indeed pitching to his nickname and the flame-thrower is anything but decipherable, according to the Major League hitters who say they simply cannot get the timing right when Oh stands on the mound.

“He’s got that deceptive delivery and good stuff to go with it,” said Adam Wainwright, the Cards’ starter and Oh’s teammate. It wasn’t just Oh’s buddy on the mound, Wainwright, who noticed the special delivery method that Oh has. The St. Louis Post-Dispatch, a local newspaper in St. Louis that covers the Cards, wrote, “He also had that unusual fastball grip and the late, giddy-up deception it creates.” The Cardinals manager, Mike Matheny, also said that one of Oh’s strengths is “deception.” It looks like more and more people in the majors are noticing that there is something about Oh’s delivery that fools his opponents.

If a pitcher delivers a deceptive pitch, it simply means it is difficult for a batter to figure out at what timing the pitcher will release the ball. Normally, a batter would estimate when to swing his bat looking at the chest of a pitcher. Most pitchers bring their arms and chest towards the center during their wind-up. At this point, batters can also see the trajectory of the ball as well as the pitcher’s grip, which would essentially let the batters guess what type of pitch is coming their way. But this is precisely where Oh differs from normal Major League pitchers.

During his stride, the righty has his left shoulder tweaked behind his body. Oh goes through his wind-up movement with the ball hidden the entire time and he twists his waist in the blink of an eye and tosses the ball without exposing his chest to the batter. That quick motion, along with the hidden grip, throws batters off, who do not have enough time to guess when the ball will be released and what type of pitch they can expect.

On top of his throwing motion, his leg kick also confuses batters. Most right-handed pitchers kick their left leg out at once and stomp it to the ground to gain power for their pitch just before they release the ball. But Oh does what some call a “double-leg kick,” in which he kicks his left leg just a few feet out in front of him as he winds up, and just before he turns his waist, Oh kicks it further out, which once again, makes it tricky to guess when he’ll release the ball.

Sun Dong-yul, former manager of the Samsung Lions in 2005 when Oh made his debut with the Lions, said, “it is a good way to shift one’s weight and power.” But the bizarre leg kick did provoke controversy in the past regarding allegations that the reliever intentionally makes the movement to throw off his opponents. In 2014, however, in the Japanese league, when Oh was challenged for his pitching form, the umpires decided it does not go against any baseball regulation. Oh’s unique pitching form is the style that he has adopted and uses on a regular basis, not merely something he has adopted to deliberately confuse batters.

The bottom line is, Oh throws off the batters twice in a short span of time, once during his wind up and once more as he kicks his left leg out. This is why, although slower, Oh’s fastball is more difficult to deal with than those of other pitchers.

“It probably would drive the Major League batters crazy when they meet Oh for the first time,” said Son Si-hyun, shortstop of NC Dinos, who has played against Oh for seven seasons in the past in the Korea Baseball Organization (KBO). “It would be difficult for them to get the timing right.”

Oh had been known as “the Final Boss” in the KBO and Nippon Professional Baseball Organization. In the KBO, he still leads in saves with 277 throughout his career, and in the NPB, he has carded 80 saves in a span of two years. But in the Major League, Oh is a rookie and how much time he would actually see on the mound was questionable before the season started. But as the season unfolded, it became clear that the Cards had made an outstanding investment by adding Oh to their bullpen.

In the 68 games this season with the Cardinals, Oh has collected four wins, three losses, 15 saves and a 1.79 earned run average. According to the FanGraphs, a website that provides baseball statistical analyses, Oh’s Wins Above Replacement (WAR), a sabermetric baseball statistic developed to sum up “a player’s total contributions to his team,” is 2.5, which is third among the MLB relievers, suggesting the Cardinals have won roughly two to three more games than it would have if the innings that Oh pitched had been tossed by a replacement level player.