Market to be flooded by rental apartments

Market to be flooded by rental apartments 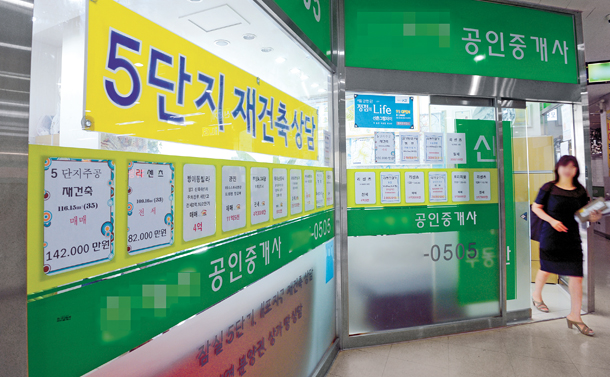 Notice of rising apartment values posted at a real estate agency in Jugong 5 Danji, an apartment complex in Jamsil, southeastern Seoul, that is undergoing reconstruction. Rising housing prices and jeonse prices have driven many to consider lease apartments, whose quality has improved. [NEWSIS]

This fall, a large number of rental apartments are expected to hit the real estate market.

According to the real estate information provider Budongsan 114, from this month through November some 20,000 rental apartments will flood the market, including 4,421 New Stays, 2,559 rental apartments provided by the government, 646 so-called Haengbok apartments and 3,184 rented by private companies.

In addition, the Seoul government is letting out 1,387 apartment units.

New Stay units are long-term contracts in which tenants can stay for a minimum of eight years with monthly rent hikes limited to 5 percent a year. They will be offered in the greater Seoul area, including Incheon, Suwon and Hwaseong, as well as North Chungcheong, where the development of a so-called innovative city is under way.

This month SK E&C will be offering 1,086 units in the Sindongtan SK View Park 3 cha in Hwaseong, Gyeonggi. Next month Woomi Construction will offer 1,345 units in a so-called innovative city in North Chungcheong while Hanwha E&C will offer 1,213 New Stay apartments in Incheon.

The target occupants for New Stays are not low-income households as in the past but rather middle- and upper-income families. The goal of New Stays is to provide quality apartments for reasonable rent in lieu of the more expensive jeonse apartment, or long term deposits.

There are no restrictions on people applying for the long-term rental apartments, including income and whether they already own an apartment.

The government will be supplying 1,482 rental apartments in Yangju, Gyeonggi, which the tenants can purchase later, as well as 671 units in Gongju, South Chungcheong.

The government leased-apartments for low-income households will be offered for 90 percent of the average monthly rent in the surrounding neighborhood and the lease can run from five to 10 years.

People applying for government-leased apartment have to meet several prerequisites. They can’t own a residence. Households whose monthly income is less than 4.8 million won ($4,360) can apply for units that are 60 square-meters or smaller. Households with monthly incomes of 5.78 million won and under can apply for apartments between 60 square meters and 85 square meters.

Applicants for Haengbok apartments have to attend schools or work jobs near the apartments. For example, if a person is studying in Seoul they can apply for a Haengbok apartment in areas close to Seoul such as Seongnam, Hanam, Uijeongbu and Gwacheon.

The rents are 80 percent or lower than the average in the surrounding neighborhood and rent hikes will be limited to 5 percent a year. A person can live in the same apartment for a maximum 20 years. Instead of paying monthly rent, they have the option of paying a long-term deposit like jeonse.

Monthly incomes of applicants for Haengbok apartment have to be 70 percent or lower than the average income of urban laborers in the previous year. If they own real estate, it must be worth less than 126 million won. If they own a car, it can’t be worth more than 24.2 million won.

This month, Jungheung Construction will be offering 1,194 rental apartments in Dongtan 2 in Hwaseong. Woomi Construction and Keumkang are offering rentals in Seosan in South Chungcheong and Ulsan later this year.

Rental apartments were shunned in the past. They were considered housing for low-income households and many neighborhoods opposed their construction because they reduced real estate values. Today their image has improved along with the quality of the units.

An unstable real estate market has contributed to strong demand for rental apartments.

“Construction companies are showing interest in rental apartments to generate sustainable profits,” said Kim Min-hyung, a researcher at the Construction and Economy Research Institute of Korea.