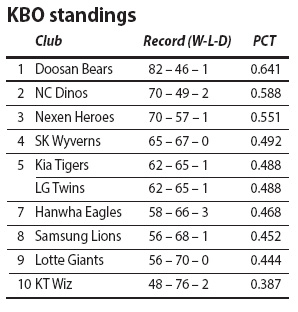 Despite scandals and Olympic competition, baseball knocks it out of the park this year

Despite unfavorable conditions and scandals that shook the Korea Baseball Organization (KBO), professional baseball in Korea has reached its peak, hosting more spectators than it ever has in the past.

A total of 56,307 fans attended the first four KBO games on Sunday nationwide, with 17,413 fans attending the Jamsil Baseball Stadium in Seoul to watch the game between the LG Twins and Lotte Giants.

Meanwhile, the Daegu Samsung Lions Park in Daegu played host to 12,872 fans while the Gosheok Sky Dome in western Seoul and the Hanwha Life Insurance Eagles Park in Daejeon also welcomed 15,142 and 10,880 fans each.

After the fourth game between the Hanwha Eagles and SK Wyverns on Sunday, the total number of fans attending KBO games this season was recorded at 7,365,242, topping the record set last year by 4,712 fans.

There are still more than 90 games left this year, which means it is possible that more than 8 million people can attend the KBO games this season, an unprecedented feat that demonstrates the growing popularity of the ball game among Koreans. A representative from the KBO said, “We may even exceed the 8.35-million mark.”

Despite the successful year it had, this season had been an especially difficult one for the KBO.

The league started on an auspicious note, with more than 85,000 fans finding their ways to the nearest stadiums for the opening games on April 1.

On May 5, Children’s Day in Korea, a total of 114,085 people attended the KBO games, the greatest number of spectators in a single day.

But things quickly went south when game-rigging scandals and the Summer Olympics put a damper on the growing heat of sport’s popularity. Lee Tae-yang, former NC Dinos pitcher, was given in late August a suspended two-year prison term for intentionally walking or trying to walk a batter in four games last season. He was indicted without physical detention in late July for rigging games and receiving as much as 20 million won ($17,579) as compensation.

Also, the 2016 Rio Olympics took place in August and experts widely believed the interest channeled towards professional baseball would be roundly diminished. To make matters worse, the month of August saw an unprecedented heat wave that dissuaded many from going outside.

But the love of baseball from Koreans did not die away. On August 11, the league exceeded the 6-million mark, and on September 4, it reached the 7-million mark for second straight year. 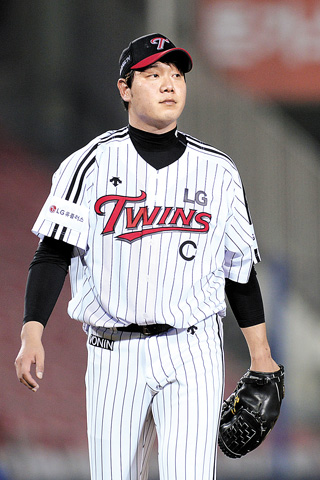 The LG Twins’ Ryu Jae-kuk is more than a pitcher. He’s also the captain and leader of the team on the ground as well as in the dugout.

As of August, the Twins have played in 38 games since the regular season went into its second half. In those games, the Twins recorded 22 wins and 16 losses for a winning rate of .579. This is the second highest winning rate among the 10 KBO teams during this period.

But in the first week of September, the Twins suffered five losses while grabbing only one win. Behind the only win was Ryu. On Sept. 1, against the Hanwha Eagles, Ryu pitched for six and 2/3 innings, yielding only three hits and two runs. Adding another win to his belt, he tallied, for the first time in three years, wins in the double-digits.

Six days later, against the Nexen Heroes, Ryu pitched six innings and gave out no runs while striking out four batters to take his 11th win of the season.

The Twins’ starting lineup has been in limbo recently, but Ryu has done more than his share to bring the team out of this slump.

His curveballs have been the driving force behind his success on the mound. “I have been able to control my pitch well recently,” Ryu said.

Ryu also began to throw more cutters than two-seam fastballs, which used to be his favorite type of pitch. As such, batters familiar with Ryu have often expected two-seam fastball, only to have their game thrown off when Ryu began spraying cutters their way. “Cutters are especially useful especially against lefties,” he explained.

Ryu isn’t just the ace of the team on the mound, though, he’s also the pillar that holds the team together. During the early second half of the season, some angry fans held a banner up that said Yang Sang-moon, the Twins manager, should take responsibility for the Twins’ struggle and step down.

He made a statement about this and said, “Such banners are not helpful at all, we need our manager and we want to play with him.”

This may have outraged the fans but for the squad and the coaching staff, such a statement coming from their team’s captain was exactly what they needed to boost their spirits.

And the proof of this was in the pudding, for after he made the statement, the Twins went on a nine-game winning streak.