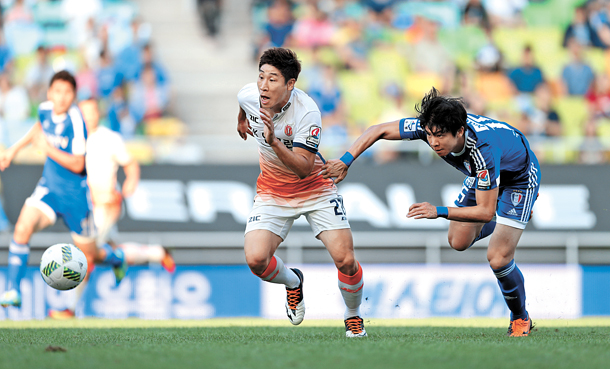 Jeju United FC striker Lee Keun-ho, center, will meet his old teammates from Jeonbuk Hyundai Motors today at home. Lee and Jeju need a win from today’s match as they hope to gain a berth in next year’s Asian Champions League. [K-LEAGUE]

Jeju United FC forward Lee Keun-ho never found Jeonbuk Hyundai Motors’ signature green too intimidating. In fact, he donned it for a season last year, playing alongside Lee Dong-gook and Kim Shin-wook while on loan from his then-club El Jaish SC of Qatar. But now that he has to face them again today at home in Jeju at a crucial juncture of the season, Lee cannot help but express a hint of nervousness towards his former team, which is enjoying a record-breaking unbeaten run.

“They are basically the Korean national team,” Lee said when asked about his former club, referencing the ferocious skill of Jeonbuk’s roster. As Lee pointed out, Jeonbuk has former as well as current national team players among its ranks, from top to bottom. Up front, Jeonbuk has Lee Dong-gook, Kim Shin-wook and Lee Jong-ho. In the midfield, Kim Bo-kyung and Lee Jae-sung distribute and control the pace of the game. In front of the goal, Kwon Sun-tae is the last line of defense as the team’s goalkeeper. In addition to these names, foreign players such as Leonardo Rodriguez Pereira and Ricardo Lopes Pereira are the top-class of the K-League Classic. Under Choi Kang-hee’s watch, this roster has pulled off an unprecedented feat, a 30-game winning streak, an accomplishment matched in no professional sports leagues in Korea. With only three more games remaining in the regular season, Jeonbuk has already secured the regular season trophy. The club will also face off FC Seoul in the semi-finals of the 2016 Asian Champions League (ACL).

Next up on Jeonbuk’s agenda is Lee and Jeju today. “I cannot even describe how good they are,” Lee said. “They are simply the best in the league right now. They are re-writing the record after every game. We are 0-2 against Jeonbuk this year.”

Jeju travelled to Jeonbuk on April 2 for the first matchup between the two this year, during which Jeonbuk breezed past Jeju 2-1. Lee had just joined Jeju and could not step into the pitch as he was not yet prepared physically. They met up again on July 16, on Jeju’s home ground this time, but the result was exactly the same, 2-1 Jeonbuk. Lee played full time then, but his effort wasn’t enough to save his team.

Given the past record, Jeonbuk has the upper hand, but Jeju and Lee cannot back down this time around. Jeju is ranked fourth in the league right now and must up its rankings in order to earn a berth in next year’s ACL.

If Jeju takes down Jeonbuk, depending on the result of the match between Seongnam FC and Ulsan Hyundai FC, who are ranked third at the moment, Jeju could climb up to third.

On the flip side, if Jeju loses the match today, it may well take few steps down. Jeju is in the lead ahead of the teams ranked from fourth to eight, but by a narrow margin, with a difference of one to two points among them. To be able to play in the upper group in the split round and avoid the possibility of demotion, Jeju needs at least a draw today. In the K-League Classic’s split system, the top six teams from the regular season are assigned to the top group to play in a round-robin tournament. The bottom six teams are grouped in the lower bracket and play in a round-robin tournament among themselves. Those who finish 11th and 12th after the tourney play in promotion and relegation playoffs against the top two teams from the K-League Challenge, the second-tier league of K-League.

“You never know football,” Lee added. “We lost to Jeonbuk, sure, but the game itself was not bad. We are also in an upward trajectory, not losing a game in the past four matches. And it’s a home game for us.”

And Lee says he knows the ins and outs of his former club. Last year, wearing the green jersey, Lee netted four goals and tallied one assist in 15 games. “I have good friends there and I know them, which is perhaps why I get out there and play harder against them,” according to Lee. “For me the match against Jeonbuk is like a final match.”