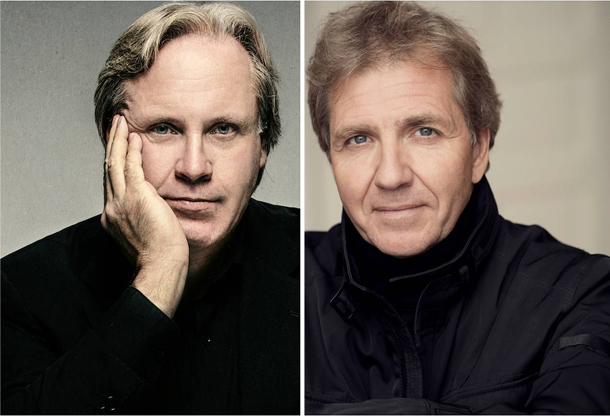 Markus Stenz, left, a German conductor, has been appointed as the Conductor-in-Residence of the Seoul Philharmonic Orchestra while Thierry Fischer, current music director of the Utah Symphony Orchestra, has been appointed as the Principal Guest Conductor. The two conductors will begin working with the orchestra next January under three-year contracts. [SEOUL PHILHARMONIC ORCHESTRA]

Thierry Fischer, a Swiss conductor who is currently a music director of the Utah Symphony Orchestra in the U.S., has been appointed as the Seoul Philharmonic Orchestra’s Principal Guest Conductor, while Markus Stenz, a German conductor who is best known for his 11-year tenure as principal conductor of the Gurzenich Orchestra, Cologne, has been appointed as the Conductor-in-Residence. Both conductors’ terms start next January and the contracts each run for three years.

“We are thrilled that the two first-class conductors of international stature have accepted the invitation to work closely with the Seoul Philharmonic Orchestra. There is no doubt that both will inspire all of us at the orchestra to ever greater achievements. We truly look forward to a new chapter of ambitious music-making and creative programming,” said Choe Heung-shik, CEO of the orchestra.

“During his 10-year tenure Maestro Chung built the orchestra up into one of the top orchestras in the world, and I will do my best to uphold his incredible legacy, whilst exploring new directions together with Seoul Philharmonic members, staff and Composer-in-Residence Unsuk Chin,” said Fischer.

“When I performed Mahler, I felt such openness from the orchestra for being flexible and living the music with a full heart and mind,” he said. “I’m looking forward to exploring the orchestra’s refinement and tailoring it to the various eras of music.”