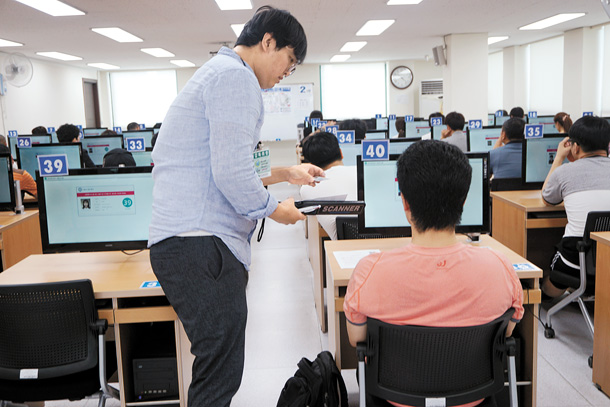 In April of last year, a 22-year-old Korean-Chinese took a photo of a qualifying exam for data processing technicians using a smartphone he had managed to sneak into the test-taking center. The man sent the photo to a broker, and a few minutes later, the broker told the young man the answers via an earphone he was wearing. An exam supervisor spotted the man and reported him to the police. Last November, Ulsan District Court sentenced him to eight months in prison with two years of probation.

But the young man is not alone and cases like his are growing. Foreigners reported for cheating at national technician certificate exams grew from four in 2011 to 17 last year, and Korean-Chinese were involved in most cases, according to the Human Resources Development Service of Korea.

The Ministry of Justice included the national technician certificate as one of the requirements in 2012 for the F-4 visa, which is often used by overseas ethnic Koreans in sectors that require specific skills other than manual labor. Overseas Koreans with F-4 visas can continue working in Korea if granted a continuance every three years. As of 2015, Korean-Chinese constitute 85.5 percent of F-4 holders.

“Many Korean-Chinese cannot resist the temptation of cheating when they are desperate for visas and the exams are difficult,” said Kim Kook-Chun, a 44-year-old Korean-Chinese who acquired his photography technician certificate in 2014. “Some even encourage cheating to make money out of it.”

The Human Resources Development Service of Korea introduced metal detectors to prevent the use of electronic devices for cheating on national technician certificate exams and it plans to increase training for exam supervisors. Kwak Jay-Seok, the head of the Migration & Diaspora Research Institute said “new requirements for the F-4 visa are necessary to make them practical and reflective of the demands of Korea.”