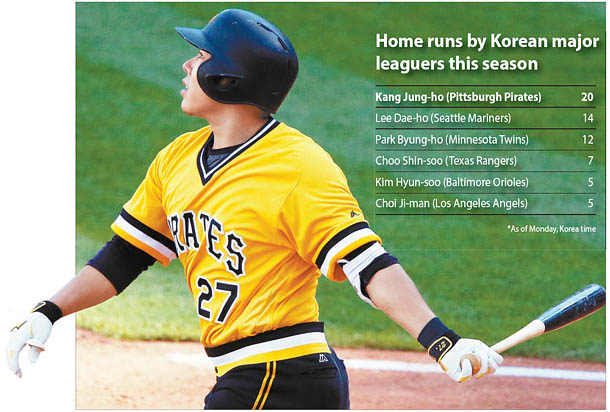 Kang Jung-ho of the Pittsburgh Pirates looks on after hitting a two-run homer on Sunday at the PNC Park against the Washington Nationals. After the home run, Kang became the first Asian infielder in the MLB to accumulate over 20 homers in a season. [AP/NEWSIS]

How far can “King Kang” go this season?

Kang Jung-ho of the Pittsburgh Pirates made Major League Baseball (MLB) history as he became the first Asian infielder to tally more than 20 home runs in a season.

Kang, the National League Player of the Week for the second week of September, accomplished the feat on Sunday at the PNC Park when he shot off a two-run homer at the bottom of the seventh against the Washington Nationals. After three balls, Kang sent off the 96.5-mile-per-hour sinker to the left field to bring Josh Bell home along with himself.

The first run of the day for the Pirates also came from the tip of Kang’s bat. In the bottom of the first, Kang, who played on the third base while batting fourth, singled on a line drive to center field and brought home John Jaso.

The game was tied 5-5 before Kang belted his jack, which allowed the Pirates to lead at 7-5 by the end of the seventh inning. But Kang’s effort was for naught. The tug-of-war between the Pirates and the Nationals came to an end with the Nats’ five-run eighth inning. The four-hour long game that saw injuries and bench-clearings ended at 10-7 with the Nationals taking an unpleasant win.

Although the Pirates took a heavy blow in their bid for a wild card spot to eventually gain berth to the postseason, the game was more than significant for the 29-year-old third baseman from Korea.

The homer on Sunday was his first in nine days since the game against the Cincinnati Reds on Sept. 16, during which he had a perfect day going 1-for-1 with one run and three runs batted in. Not only is he the first Korean big leaguer after Choo Shin-soo of the Texas Rangers to tally over 20 dingers in a single season, but he is the first and the only Asian infielder to reach that number. Before Kang, Tadahito Iguchi of Japan cranked out 18 home runs in 2006 while playing for Chicago White Sox as a second baseman.

With only a week to go before the regular season comes to its end, Kang will be making his final stride as he aims to tie or even surpass the record set by his compatriot Choo in most home runs hit by a Korean slugger in a single season. In 2010 and again in 2015, Choo, who is currently undergoing rehab due to a fractured forearm, smacked out 22 homers in one season. The Rangers outfielder hopes to return to action for the postseason. The Rangers have already clinched the division title in the American League West.

In the Korea Baseball Organization (KBO), Kang had played as shortstop for the Nexen Heroes. He was one of the few slugging shortstops to star in the KBO, setting the shortstop home-run record when he drove 40 dingers in 2014 before joining the MLB.

Kang’s current run also bodes well as he hopes to play full season next year. This year, the Pirate had to sit out the first few weeks due to the injury he obtained last year, which cut short his rookie season by a month. Then playing a shortstop, Kang tore his MCL in mid-September and ended the season while batting .287 with 15 homers and 58 runs batted in.

Along with Kang, Kim Hyun-soo of the Baltimore Orioles also found himself rounding the bases after going deep on Sunday.

Batting seventh while playing on the left field, Kim homered at the bottom of the second inning at Oriole Park at Camden Yards against the Arizona Diamondbacks. It was a two-run homer that gave the O’s a 2-0 lead early in the game. Kim’s dinger, which was also his fifth of the season, also turned out to be the game-winning hit as the Orioles held the D-backs to only one run entire game to clinch 2-1 win.

After the win, the Orioles gained higher ground in their wild card race with only a week to go before the season wraps up.