Pocog rolls up sleeves for 2018 Games

Pocog rolls up sleeves for 2018 Games 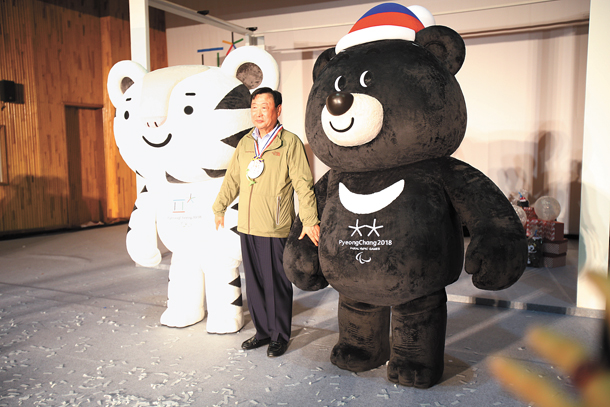 The PyeongChang Organizing Committee President Lee Hee-beom poses for photo with the mascots of the 2018 Winter Olympics. [NEWSIS]

As of today, there are only 500 days remaining before the commencement of the 2018 Winter Olympics with its grand opening ceremony. The Games are slated to go for 17 days from Feb. 9 to 25 under the slogan, “Passion. Connected,” symbolizing a new era of festivity, hospitality and intercultural connections that transcend borders.

Pyeongchang County in Gangwon, which is located some 180 kilometers (112 miles) east of Seoul, is the third place in Asia to host the Winter Games after Sapporo, Japan, in 1972 and Nagano, Japan, in 1998.

Pyeongchang applied to host the 2010 Games, only to fail and try its luck again for the 2014 Games. Losing a second time, Pyeongchang finally gained the right to host the 2018 Olympics in July 2011, beating out Munich, Germany and Annecy, France in the process.

The 2018 Games will occur in 12 different venues across Gangwon, including Pyeongchang County, Gangneung city and Jeongseon County, with as many as some 6,500 athletes and officials from 95 nations expected to take part.

Of the 12 venues, six will be newly constructed for the Games. Aside from these, the Pocog will revamp already-existing venues to fit Olympic standards to minimize the overall cost of construction. According to the Pocog report, the construction process for the six newly built venues is on track to meet the deadline, with 88 percent of construction already completed.

Despite the venues being spread out over three different locations across Gangwon, all 12 are accessible within 30 minutes of Alpensia Sports Park, which will hold the Pyeongchang Olympic Stadium, the venue for the opening and closing ceremonies of the Games.

The Gangneung cluster will hold five venues for the Games, including the Gangneung Oval, where the speed skating events, some of the most highlight events of the Winter Olympics, will be competed. Gangneung Oval is currently under construction and will be completed in March 2017. To test the venue before announcing its completion, Gangneung Oval will host the International Skating Union (ISU) World Single Distances Speed Skating Championships in February 2017.

The ISU Speed Skating Championship, however, is just one of the many test events to take place in the venues across Gangwon. Pyeongchang and Jeongseon have already hosted four test events earlier this year, including the 2016 Audi International Ski Federation (FIS) World Cup in Jeonseon Alpine Centre and 2016 FIS Freestyle Ski World Cup in Bogwang Snow Park. Two more test events are scheduled by the end of this year and before the onset of the 2018 Games, a total of 21 test events will be held as prior inspections for the Olympics.

The 2018 PyeongChang Games will also mark the historic start of a series of Olympic Games in East Asia.

After the 2018 PyeongChang Olympics will come the 2020 Summer Games in Tokyo, followed by the 2022 Winter Games in Beijing. Thomas Bach, the president of the International Olympic Committee (IOC), said that this is the “time of Asia” during his visit to Korea last week. “Some scholars have said we’re living in the century of Asia, and in Olympic terms, I can confirm that this is the time of Asia,” Bach said.

He further added that this is a new era for the Olympics and an opportunity for Asia to demonstrate its unity to the world.

In anticipation for the Games, Lee Hee-beom, the president of Pocog, said nation-wide cooperation and support is a must as the countdown to the Games has entered the 500-day mark. “There isn’t much time left, and we have to use it efficiently,” Lee told the Yonhap News Agency. “After the end of the Rio de Janeiro Summer Olympics (in August), the eyes of the sporting world are now on PyeongChang.”

In the meantime, the Pocog will hold a D-500 ceremony in Yeouido Park, Seoul today as its latest effort to promote the Games. The Pocog will set up various kiosks as well as host K-Pop concerts throughout the day.