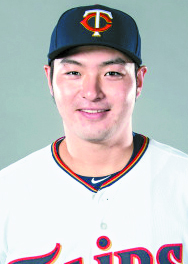 The Minnesota Twins’ designated hitter Park Byung-ho returned home on Wednesday to undergo rehab after his season was cut short in August due to a finger injury. Upon his arrival at Incheon International Airport, Park was greeted by local fans and reporters and said he is satisfied with the experience he’s had and would like to try his bat again in the majors next season.

When Park was spotted at Incheon International Airport early in the morning on Wednesday, he was all smiles. He seemed unfazed despite the surgery on his right middle finger, which ended his season prematurely. “I went to the United States last winter with big dreams,” said Park. “The outcome wasn’t great, of course, but I am satisfied with the valuable experience I gained. I had surgery due to an injury and I came home early for recuperation. I will get myself back in shape and take a swing at it again next year.”

Park joined the Twins of the Major League Baseball (MLB) after inking a four-year contract in 2015 worth $12 million, including incentives, with an option for a fifth year through the posting system. The two-time Korean league MVP had big hopes as he made his debut in the big league.

Soon after the season kicked off, Park showed the potential as the slugger that the Twins have been searching for. In April alone, Park sent six balls over the fence. The 30-year-old, ranked in the top 20 by MLB home runs this season in terms of distance travelled, sent his second homer of the game 466 yards in true distance. By mid-June, Park had slammed out 12 home runs in the big leagues.

Park had an auspicious start, it seemed, showcasing his arm early in the season. But despite homers, his first season in the MLB was in fact a roller coaster. He simply could not pull it together against MLB pitchers’ fastballs. As a matter of fact, out of 12 jacks, only one came against fastballs traveling more than 95 miles per hour. His weak point was compromised by June and his BA took a heavy blow, falling to .191 before he was sent down to the minors for a tune-up stint.

Park batted .191/.275/.409 with 12 home runs and 24 runs batted in (RBI) during his 215 at-bats in 62 games for the Twins before he was demoted to the minors in late June. “MLB pitchers were better than I anticipated and I came up short,” Park explained. “Basically, they tossed faster balls, not to mention the movement of their pitches, which was quite different (compared to the pitchers of the Korea Baseball Organization).”

He added, “Now that I am well aware of how things are in the States, I need to prepare myself well for the next season.”

While in the Triple-A during his tune-up, Park batted .224 with 10 homers and 19 RBIs in 31 games, before he stepped out due to pain in his hand. MLB.com reported in late August that “Park…had been dealing with an injured wrist throughout the season, but it worsened recently.”

“It’s a cartilage tear in my finger,” Park explained. “The operation went well and I should be able to hit light balls in November. It shouldn’t be a problem for me to be in full shape before spring camp next year.”

When asked about the home runs, Park said he should have relaxed more. “In retrospect, I thought to myself how things would have turned out if I took it easy. My batting average suffered early in the season despite the home runs. Slugging I could do, but I should have focused more on accuracy and making contact. But I think my homer record from the first year is a promising sign for the next one.”

Park thinks he can make a breakthrough by changing his batting form. “Above all else, I felt the vibe (of the MLB) physically so I need to do certain things differently,” he said. “I’ve got to be able to bat more concisely and I think that’s the key to going up against fastballs.”