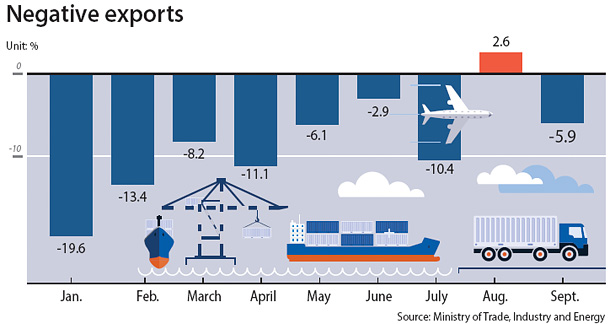 Korea’s exports fell 5.9 percent in September from a year earlier under the impact of declining shipments of cars and smartphones. Outbound shipments registered $40.9 billion last month, down from $43.4 billion compared to the same month last year, according to the Ministry of Trade, Industry and Energy on Sunday.

The downturn dampened a cheerful mood from the August reading in which exports grew 2.6 year-on-year for the first time in 19 months, driven by higher demand for major Korean export items including smartphones.

Things took a turn for the worst in September as tech giant Samsung Electronics recalled its Galaxy Note7 over battery problems that led to a few models catching fire.

Along with the disappointing performance of mobile devices, automotive exports also had their worst performance in more than seven years, largely due to a union strike at Hyundai Motor and Kia Motors. The Trade Ministry estimates the strike cost the car industry $1.1 billion and 79,000 units. Car exports last month dropped 24 percent from a year ago to $2.4 billion.

Outbound shipments of semiconductors decreased by 2.6 percent to $5.7 billion.

Still, some items such as computer, display and auto parts saw increased exports.

Cosmetics, in particular, reported record-high exports of $420 million as demand surged in China and neighboring Asian nations. September’s cosmetics exports marked a whopping 75.1 percent increase over a year ago.

Despite the falling exports in general, the country managed to post a positive trade balance for 56 straight months due mainly to shrinking imports.

September’s trade surplus came to $7.1 billion with imports in September falling 2.3 percent on-year to $33.8 billion. The lower imports were driven by the decline of gas and petroleum products. Still, imports of consumer products increased.

Exports to China, however, fell 9.1 percent in September from a year ago and those to the United States and the European Union also dropped 6.1 percent and 14.5 percent.