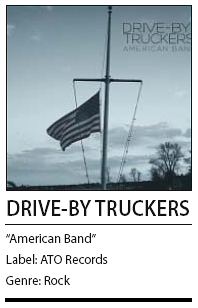 The Drive-By Truckers are celebrating their 20th anniversary this year in a grave mood. The cover art of an American flag at half-staff is a tip-off.

The liberal-leaning Southern rockers who have long struggled to both celebrate their roots and recognize its bitter past have delivered a sober new album with a withering view of today’s South.

The often-gloomy but vitally important “American Band” sees the Truckers weigh in strongly on such issues as police shootings, the National Rifle Association, depression, school massacres, lying CEOs and even progress.

“Are you now or have you ever been in cahoots with the notion that people can change?” co-singer and co-guitarist Mike Cooley asks in the nihilistic “Once They Banned Imagine.” His songwriting and singing partner, Patterson Hood, is similarly glum on another song: “Clouds are forming in this state of mind.”

Previous Truckers albums have addressed economic struggles and race, but mostly using narrative devices. This time, the gloves are off.