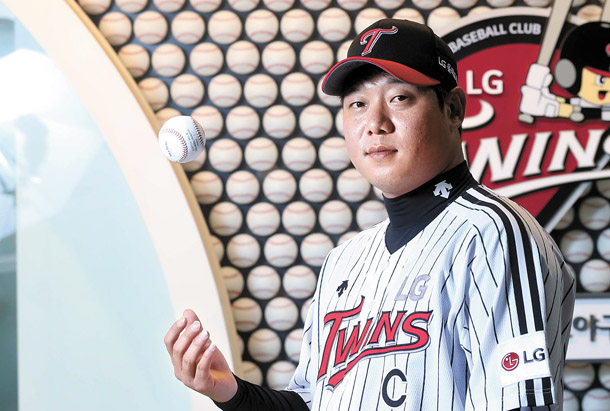 Ryu Jae-kuk, starting pitcher of the LG Twins, has been the morale booster and leader of the team throughout the season. With Ryu as the captain, the Twins will reappear in the coming postseason of the KBO. [KIM SANG-SEON]

The LG Twins of the Korea Baseball Organization have finally made it. For the first time in two years, the Twins will see themselves playing in the KBO’s postseason. At the fore of the Twins’ recent run stands their captain, Ryu Jae-kuk, who was selected as Most Valuable Player for the third week of September, thanks to his shutout victory over the Chuseok holiday.

“The Twins this year?” said Ryu when JoongAng Ilbo met the 33-year-old veteran pitcher. “We might not have someone who stands out as a cut above the rest, but we’ve gotten this far. I don’t even know how far we could go.”

The Twins finally earned their berth to this year’s playoffs on Monday when they took down the Samsung Lions 10-3, becoming the fourth team in the KBO to do so after the Doosan Bears, NC Dinos and Nexen Heroes. Regardless of what happens for the remainder of the season, the Twins will finish above fifth in the league standings.

This in itself is a reason to celebrate, as the team had its share of ups-and-downs this season. At one point in May, the Twins climbed up to second place in the league, only to have their standings plummet to eighth in July. Yang Sang-moon, the manager, gave more time on the field to younger players. Some fans were unhappy about the skipper’s policy, flashing banners during the Twins’ home games that called for his resignation.

Perhaps the Twins’ midseason struggle was somewhat inevitable given this age shift. Nevertheless, things turned around for good by the second half. After defeating the Bears on Aug. 3, the Twins went on a nine-game winning steak, which was just a part of an upward trajectory that the team enjoyed.

“I told the young players about the baseball fever that comes during the postseason,” Ryu said.

Ryu was appointed as the captain at the onset of the season, becoming the first pitcher-captain in 13 years for the Twins. “The Twins had a strict hierarchy and it always grieved me to see younger players intimidated by older players,” Ryu explained. “I decided to assume the post because I wanted to change that.”

While an honor, Ryu’s leadership has also been a heavy responsibility, especially during the team’s slide.

“I asked myself if I was leading my team to its downfall,” Ryu recollected. “But a coaching staffer told me it’s impossible to satisfy everyone, which relieved some of my stress.”

Once he pulled himself together, Ryu became determined that as team leader, he would herald the team’s success and salvage it from limbo. Tallying five wins and eight losses before the All-Star break in July, Ryu’s performance saw a drastic about-face, taking eight wins while suffering only two losses since the third week of July. On Sept. 18, Ryu even grabbed his first shut-out victory and 13th win over the season, topping his previous personnel best of 12 wins, set in 2012.

While an experienced pitcher, he is far from being a KBO veteran. In fact, Ryu started out his career in the United States, trying out his shoulder in the Major League right after high school instead of in the domestic league. He made his big league debut in 2006 with the Chicago Cubs on a relief assignment. He then moved around in the United States before he was relieved and joined the military to complete his mandatory service. Before leaving the majors, he tallied one win and three losses with an earned run average of 7.49 and 32 strikeouts.

After his discharge, he joined the Twins in 2013, becoming the winningest pitcher in the league during his debut season with 12 wins and two losses (winning percentage of .857). But since then, his season has been haunted by injury after injury.

This year, however, things are different for Ryu, as a player and as a person. He’s more mature now, prioritizing the team over his own success. Although he may be taciturn at times, he does not shy away from speaking up when necessary. When his manager was showered with heavy criticism, Ryu defended him and said publicly, “I want to play with Yang.”

He said about his team and his players, “Right now, we are fired up. I can see the deep-rooted trust. At this pace, we can play against any team.”