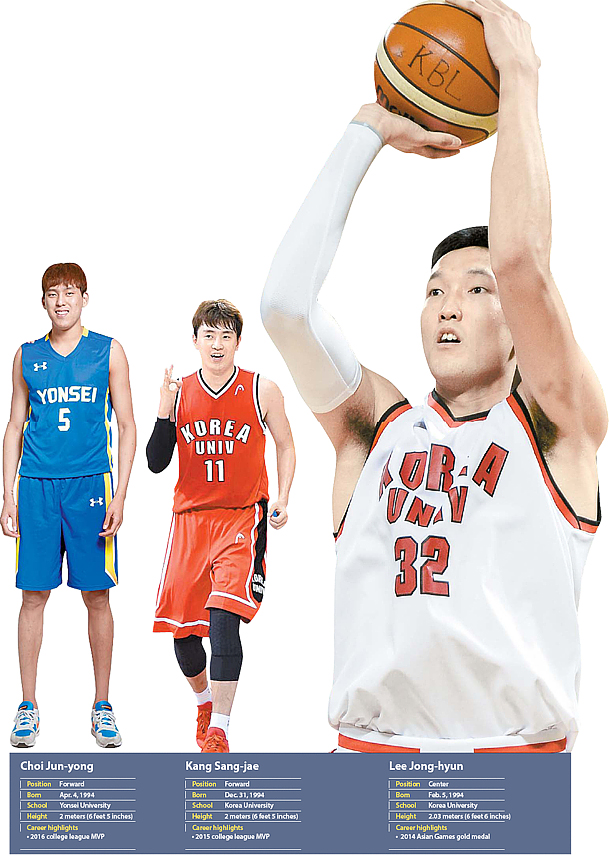 What is the destination of Lee Jong-hyun, a 2.03 meter (six feet six inches) center from Korea University who established himself as the next star to watch for?

Yoo Jae-hak, head coach of the Ulsan Mobis Phoebus, may hold the answer to this question, as the Phoebus was given the first pick in the coming 2016 Korean Basketball Organization (KBL) rookie draft.

In past seasons, the draft lottery and rookie draft occurred on the same day in the KBL. But starting this year, the KBL adopted a system where the draft lottery takes place before the actual draft and tryout, mimicking the system used in the U.S. National Basketball Association (NBA). In the NBA, the NBA Draft lottery, an annual event held since the 80’s that determines the order of selection for the first 14 picks of the NBA Draft in the respective year, is one of the pre-season events that heats up fans’ interest for the coming season. During the event, 14 balls are placed in a lottery machine that is then mixed until the first ball is removed. A total of four balls are drawn from the lot and the team that was assigned with the drawn combination gets the first pick.

The KBL implemented a similar mechanism to increase anticipation for the season, and the draft lottery took place on Monday with the actual draft slated for Oct. 18. 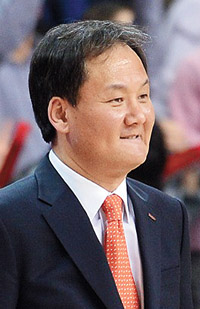 During the lottery event, it was Phoebus, six-time Champion of the KBL, that was given the first pick of this year’s draft.

For Phoebus, who hasn’t had much success in recent drafts, obtaining the first pick was indeed pleasant news. “We haven’t had any success recently in terms of rookies so we are hoping this year will be our year,” said an official from the team. After the decisive moment, head coach Yoo as well as Yang Dong-geun and Ham Ji-hoon, franchise stars, jumped out of their seats, unable to suppress their excitement. It was the first time that Phoebus had been given the first pick since 2012, and the fourth time in the franchise’s history.

After relocating and changing the franchise name from Busan Kia Enterprise to Ulsan Mobis Automons in 2001, the first time that the team had the first draft pick was in 2003. Kim Dong-woo, a forward who now plays for Seoul Samsung Thunders, donned the Mobis jersey for seven seasons after joining the team as first pick in the 2003 KBL Draft.

Because of their miserable 2003-04 season, Ulsan was again given the first draft selection. The year of 2004 was truly a momentous one for the team. Not only did it change its mascot from Automons to Phoebus, but Yang, who would grow to become the franchise icon, joined the team that year. After spending a season rebuilding, Phoebus would go on and take the championship title in the 2006-07 season, their second KBL championship in the franchise history. In 2012, Kim Si-rae put on the Phoebus uniform as the first pick, only to be traded to the Changwon LG Sakers after just one season.

Starting from 2012 was Phoebus’ golden era, who went to claim three consecutive KBL Championship titles from 2012 to 2015. But the glory came with an unexpected side effect. From 2013 to 2015, Phoebus was given the last selection at the KBL draft for three years.

However, patience was indeed a virtue as the first selection given this year could not have come at a better time.

At this year’s draft, some of the college topliners, who are also considered some of the best prospects that the KBL has seen in a while, are planning to make their debuts and Lee of Korea University is the leader of the pack.

Standing at 2.03 meters, he’s already built a reputation for himself as a big man to count on by contributing to Korea’s 2014 gold medal win at the Incheon Asian Games.

With a wingspan of 2.23 meters, he also led the team during the 2014 International Basketball Federation (FIBA) in blocks with 2.6 on average. He went and tried his luck in the NBA by participating in 2015 NBA Draft but went undrafted.

But the failed attempt at the U.S.-based league did not kill his spirit. “I am going to shake things up whichever team I go to,” he said. As a center custom-made to bolster Phoebus along with Ham, Lee looks to be the most plausible fit in Yoo’s eyes.

Together with Choi Jun-yong and Kang Sang-jae, the three players make up the “Super Rookie Trio.”

Choi, a center for Yonsei University, led his college to take the title from this year’s college league, a title that eluded the otherwise elite university in the sport for 11 years. He was selected as the MVP. What makes Choi unique is that his growth spurt kicked in late, and as a result, he can cover different positions on the court deftly, from shooting guard to power forward as well as his regular position, small forward.

Kang, Lee’s teammate, also brings a thing or two on the court. His forte is accurate mid-range jumpers and hustle plays in defense, not to mention he already has some international experience under his belt after playing for the Korean national team. His heyday in college was last year when he received the MVP honor of the college league.

With such prospects at this year’s draft, Phoebus skipper Yoo seems to have what some may call a “high-class problem,” a well-deserved honor after gaining success year after year despite the roster, which has no real depth to speak of. “I will discuss with the coaching staff and the officials of the team whether to select either Lee or Choi,” said an elated Yoo.