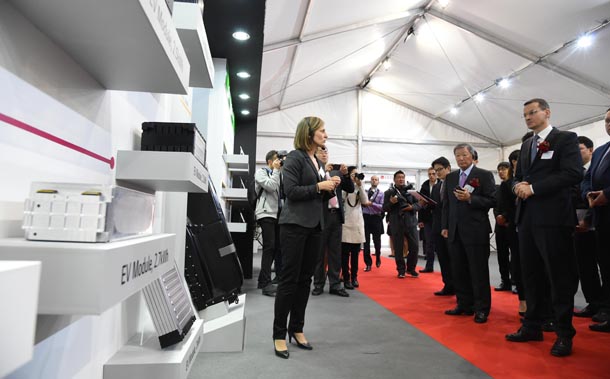 LG Chem, Korea’s top battery maker, is strengthening its foothold in the European market with a new factory in Wroclaw, Poland.

The company held a ground-breaking ceremony for its first large-scale automotive lithium battery production plant in Europe on Wednesday.

Banking on growing demand in Europe for electric vehicles, LG Chem will invest approximately 400 billion won ($360 million) in the factory through the end of 2018 until it has the capacity to produce 100,000 batteries for high-performance electric vehicles (those that can run at least 200 miles on a single charge) annually.

The factory is set for initial operation in the second half of next year.

“It will play the role of boosting the electric-vehicle industry across all of Europe,” said Lee Woong-beom, president of the battery business division at LG Chem. “We will turn the Poland plant into a mecca of battery production for electric vehicles around the world.”

The new plant will be equipped with a fully integrated production system that can produce all battery components from electrodes to cells, modules and packs to quickly respond to local demand.

Its location in Europe will give LG Chem a competitive advantage by cutting logistics costs, allowing it to ship batteries to European partners in a timely manner and build tight relationships with local clients, according to the company.

“Recently, the Polish government has announced a plan to foster a million environmentally-friendly vehicles in the country,” Mateusz Morawiecki, deputy prime minister of Poland and minister of development, said at the ceremony. “We welcome investment by LG Chem as it applies well with our goals.”

Aside from Poland, other European countries are setting policy goals to grow their electric-vehicle industry by 2020, when the Paris climate agreement takes effect.

Bank of America Merrill Lynch Global Research estimates the European electric-vehicle market will rapidly expand from roughly 111,000 cars sold in 2016 to 2.77 million by 2030.

LG Chem first entered the European electric-car battery market by inking deals with Sweden’s Volvo in 2010 and then expanded partnerships with Daimler, Renault and Audi.

Once completed, the Poland plant will supply products to local markets alongside existing overseas factories in the United States and China.