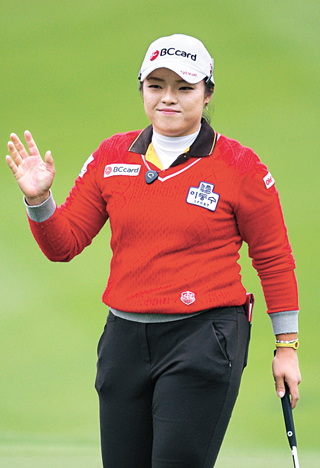 After a seven-month LPGA hiatus, Korea’s Jang Ha-na has worked her way up to the top once more, taking her third win of the season at the Fubon LPGA Taiwan Classic at Miramar Golf Country Club in Taipei, Taiwan.

She distanced herself on the leaderboard after the third round on Saturday, during which she shot a flawless tournament - as well as personal-record 10-under 62. Jang went with no bogies on Saturday while carding 10 birdies, five apiece in both halves of the round.

The final round wasn’t perhaps demonstrative of the level of performance she’s shown during the first three rounds. Nevertheless, Jang remained unfazed and carded three birdies, while bogeying two holes, to conclude the tournament one stroke ahead of runner-up Shanshan Feng of China. Her lead was insurmountable as Jang only had three bogeys, while tallying 20 birdies total throughout the tournament.

The Fubon Classic is also the third straight LPGA event claimed by a Korean golfer. Chun In-gee claimed a major victory at this year’s Evian Championship during the third week of September. Two weeks after, Kim In-kyung brought home the trophy from the Reignwood LPGA Classic in Beijing.

Jang, the winner of this year’s Coates Golf Championship in February and HSBC Women’s Champions in March, has been struggling since mid-season largely due to health issues. Jang has taken a large chunk of the season off since mid-April, starting from withdrawing at the Swinging Skirts LPGA Classic on April 21. She has missed almost two months since then with symptoms such as insomnia, blurred vision and dizziness reportedly sidelining her during the period. As a result of her absence, her standings in the Rolex Rankings also took a heavy toll, going from sixth in April to all the way down to 12th in the first week of October.

Her poor physical condition that put her out of competition for several months is thought to be from stress. She has been under a tremendous amount of stress due to several unfortunate incidents earlier in the season, including an accident at the Singapore airport where Jang’s father reportedly dropped his bag and injured Chun’s back, causing Chun to miss several tournaments.

The second-year LPGA pro tried to regain her momentum by participating in KLPGA tourneys, namely the Kumho Tire Ladies Open at Weihai, Shandong, China, in the first week of July. But things went south despite her lead up to the second round in the tournament when she shot 5-over in the closing round to yield the trophy to Lee Min-young. Jang ended up finishing fourth in the event.

But after the tourney, Jang bounced back and made consistent appearances on the LPGA tour. The best she’s done before Sunday was finishing fifth at the Ricoh Women’s British Open on July 28.

Jang’s compatriot Kim Hyo-joo finished tied at third by shooting 10-under for the tournament. Park Hee-young, another Korean golfer, also finished within the top-ten at fifth with a 9-under score.