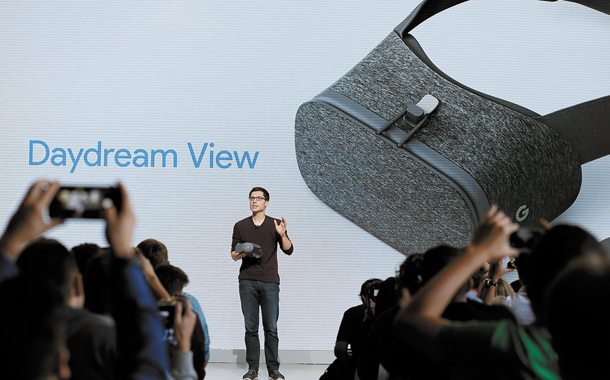 So far, the landscape of virtual reality has been split between two types of headsets: expensive, high-end devices like the Oculus Rift that require PCs and external cameras, and cheap devices like Google’s Cardboard and Daydream that use smartphones as displays, sacrificing quality to make a mass-market product.

This week, Facebook and Google made it clear that they’re both rushing toward a middle ground.

At a conference for developers, Facebook Chief Executive Officer Mark Zuckerberg revealed that Oculus was making a headset that wouldn’t require users to tether themselves to a PC. He showed a short video of a prototype that had no wires and seemed to contain the processors in a compartment sitting at the back of the wearer’s head.

“I don’t want you to get your hopes up yet,” said Zuckerberg. “We have a demo, but we don’t have a product.”

From a technical perspective, a major challenge in creating such a device is devising a way to track a person’s movements without a separate camera. So-called positional tracking allows a virtual world to be more responsive to the physical actions made by someone wearing a VR headset.

It’s one of the fundamental differences between the Oculuses of the world and the Cardboards.

With the Oculus, a camera mounted on a PC watches for the movement of sensors placed on the headset, a technique known as outside-in positional tracking. Having sensors on the device itself do that tracking is known as inside-out tracking.

Zuckerberg said this technique was something Oculus engineers are now hard at work on. It’s also the focus of Project Tango, an undertaking at Alphabet’s Google happening under the auspices of its virtual reality team.

Right now, Tango exists separately from Daydream, but a device incorporating both ideas could result in a high-end virtual reality experience powered by a smartphone.

“Everyone’s making a big deal of when inside-out mobile positional tracking be solved. Here’s a team that’s been doing it for awhile,” said Clay Bavor, Google’s vice president for virtual reality. “Tango is part of my team, so we sit in the same building. You can extrapolate that in several ways.”

When asked whether he had a timeline for a device that combined Google’s smartphone-based virtual reality platforms with the positional tracking of Project Tango, Bavor smiled coyly and said yes.

“It’s one thing to have the technical capability to do something. It’s another thing to get it into a product that people are going to love,” he said.

VR developers acknowledge there’s just not going to be a huge user base for devices that are as onerous to set up, expensive to run, and as physically constricting as the Oculus or the HTC Vive.

Bavor said these dynamics have steered Google away from building a PC-based VR device that competes directly with those from Facebook or HTC. But the simpler devices have technical shortcomings that some developers worry will leave people underwhelmed.

When Cardboard was released, there was a backlash about even referring to it as virtual reality. So many people are waiting impatiently for headset companies to figure out products that find a sweet spot that can get full-featured VR to a mass audience, through something that might look at lot like Google’s Daydream with inside-out positional tracking.

“That, to me, is the golden fusion moment,” said Aaron Koblin, chief technical officer at VR developer Within.

Zuckerberg was about as vague as Bavor about putting a timeline on the development of a mid-range VR headset.

Not everyone is convinced that such a future is imminent. Shawn Layden, president of Sony Interactive Entertainment, said his company is solely focused on the PlayStation VR, which connects to the company’s gaming console and goes on sale later this month.

“I think they’re two separate and distinct experiences. The high-end console experience you have with the PSVR or the other PC-driven systems really just can’t be replicated right now with the cellphone technologies,” Layden said. “Who’s to say over time whether those converge? I can’t.” Bloomberg