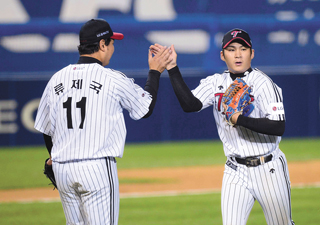 Today’s game is the second game of the series. The Twins, who finished fourth in the regular season, progressed to the first round of the postseason after defeating the No. 5-seeded KIA Tigers at the wildcard series.

The first-round of the playoffs between the Twins and the Heroes are played as best-of-five, during which whoever takes the first three wins advances to the next round. By the virtue of finishing ahead of the Twins, the Heroes get to host three out of five games, the first two as well as the fifth, slated for Wednesday, if the series drags on until then.

The strength of this year’s Heroes lies with their solid batting. The Heroes batted, as a team, .293 during the regular season, ranking them second among the clubs in the KBO.

For the Twins, although they finished the regular season ranked sixth in batting with .290 BA as well as in pitching with 5.04 ERA, their pitching lineup has gained an upward momentum towards the end of the regular season and through the wildcard series.

Ryu Jae-kuk, the captain of the Twins, has tossed eight perfect innings against the Tigers on Tuesday, on top of the shut-out game during the Chuseok holiday.

The third game of the series between the Twins and the Heroes will take place tomorrow at Jamsil Baseball Stadium, Jamsil. 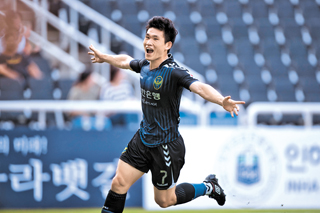 Seoul concluded the regular season with 17 wins, six draws and 10 losses, three points behind Jeonbuk Hyundai Motors, who finished first despite the nine-point deduction it received from the K-League’s disciplinary committee after one of its scouts was convicted for bribing two referees in 2013. Despite the deduction, Jeonbuk remained at the top of the league, thanks to their unbeaten run throughout the season.

Ulsan, who had a rather slow start this year, wrapped up the season with 13 wins, nine draws and 11 losses, nine points behind Seoul.

Seoul and Ulsan are two of the six Classic teams in the upper group of the split round.

In the K-League Classic under the split system, the top six teams in the standings are placed into the upper group, or Group A, of the split round to vie for the K-League trophy after 33 matches.

The champions, the runner-up and third-placed team from the round, will also gain a place in next year’s Asian Champions League (ACL).

Other than Jeonbuk, Seoul and Ulsan, Jeju United FC, Jeonnam Dragons and Sangju Sangmu FC are also in the upper group.

The bottom six teams are, on the other hand, placed in the lower group, or Group B. The team who finishes last in the split round among Group B will be relegated to the K-League Challenge, the second tier league of the K-League.

The six teams in each group will play five more matches to conclude the season.

During the press conference for the upcoming split round on Wednesday, Seoul’s skipper, Hwang Sun-hong said they will try to win all five matches to collect the championship title.

On the other hand, Yoon Jong-hwan, Ulsan’s manager, said that they will show that Ulsan is an ACL material. Ulsan is in the upper group of the playoff round for the first time in two years. The K-League title has eluded Ulsan since 2005.

Others in the upper group will also play this weekend. While Jeonbuk hosts Jeju at its home, Jeonju World Cup Stadium, Jeonnam will travel to meet Sangmu at Sangju.

Who will be demoted to K-League Challenge? This is the question that the managers of the clubs in the lower half of the standings are aching over as they go into the split round of the K-League Classic starting this weekend

The six teams who finish within the bottom bracket of this year’s K-League Classic are assigned to Group B in the split round and will play five subsequent games. Whoever finishes last from the round will face relegation to the Challenge. The six teams in the bottom group are Seongnam FC, Pohang Steelers, Gwangju FC, Suwon Samsung Bluewings, Incheon United FC and Suwon FC.

All six teams will be playing their first match of the split round this weekend. On Saturday, Steelers and Bluewings will go at it at Steelers’ home turf, the Pohang Steel Yard. On Sunday, Seongnam will host Incheon at Tancheon Sports Complex while Gwangju travels to Suwon to meet Suwon FC on the road.

For Incheon FC, who finished just two points ahead of Suwon at 11th in the league, they will do everything they can to avoid demotion.

This was a rough season for Incheon. After prolonging the struggle early in the season, Kim Do-hoon tendered his resignation from the post to assume responsibility for the team’s poor performance. Since he resigned in late August, Lee Ki-hyung has been the caretaker of the team.

As for Lee, the first match of the split round bears more meaning than meets the eye.

Lee himself played for Seongnam, leading the team to take the Classic title in 2003.

For Seongnam, on the other hand, being in the bottom group of the split round comes as a shock.

One of the winningest clubs of the Classic, with seven titles on its shelf, this is the second time Seongnam is in the bottom split in three seasons. Seongnam is also a two-time winner of the ACL, which they won’t be able compete in again next season.