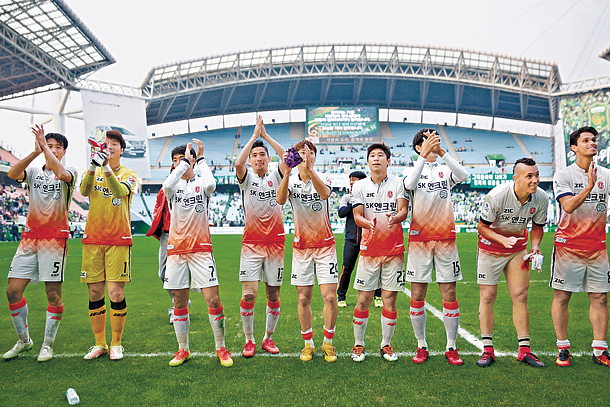 Jeju United FC players celebrate their 3-2 win on Saturday over Jeonbuk Hyundai Motors during the first match of the split round in this year’s K-League Classic season. Jeju’s win snapped Jeonbuk out of their undefeated run. [K-LEAGUE]

Nothing good lasts forever, as Jeonbuk Hyundai Motors learned this weekend after their 33-game winning streak in the K-League Classic this season was broken by a loss to Jeju United FC.

The previously undefeated team hosted Jeju at home on Saturday at Jeonju World Cup Stadium in North Jeolla and saw their record broken by a 3-2 loss to the visitors.

At the outset of the game, things seemed to be looking good for Jeonbuk. Lee Dong-gook, who was leading the league in overall scoring with 189 career goals, scored his 190th goal just before the whistle blew to conclude the first half.

Kim Ho-jun, Jeju’s goalkeeper, leaped to grab Jeonbuk’s cross from the flank, but the ball slipped out of his hands. The ball then bounced off the head of Jeonbuk’s Brazilian forward Edu, which Lee capitalized on and pushed inside the empty goal.

Not only was it Lee’s 190th career goal, it also marked his 10th this season, making this year the eighth consecutive season that the all-time leader in scoring has netted more than 10 goals in a single season.

But the game was equalized just five minutes after the second half started. Jeju’s Brazilian striker Marcelo Toscano tied the game at the 50th minute by converting a header from An Hyeon-beom into Jeonbuk’s net.

After the goal, Jeonbuk made relentless attempts to score, but Jeju goalkeeper Kim wasn’t going to let another mistake get the best of him, constantly rejecting Jeonbuk’s lethal shots left and right.

The power team’s opportunity to reclaim the lead finally came when they were given a penalty kick in the 75th minute, but striker Lee failed to capitalize on the spot kick, the ball bouncing off the top of the goal post.

A missed opportunity, for sure, because less than a minute later, Jeju’s An netted the goal that propelled his team into the lead.

Jeonbuk midfielder Shin Hyung-min quickly retorted seven minutes later with a match equalizer, his first goal of the season, but it didn’t take long - two minutes in fact - before Jeju answered with another goal by striker Kim Ho-nam, who was substituted into the match in the middle of the second half. It turned out to be the game clincher.

“I am glad that we were able to break Jeonbuk’s streak,” said the forward, who was selected as the man of the match. “I am satisfied that I was able to turn things around. Our goal is the Asian Champions League, and we are striving toward our goal.”

Elsewhere in the K-League Classic split round, FC Seoul claimed a 2-0 win over Ulsan Hyundai FC to finally match Jeonbuk in terms of points, though Jeonbuk remains at the top of the league standing due to goal difference.

Longtime rivals Jeonbuk and Seoul will be meeting for the second leg of the semifinal of this year’s Asian Champions League this Wednesday at Seoul World Cup Stadium. After routing Seoul 4-1 in the first leg last month, Jeonbuk currently leads the series with one win.