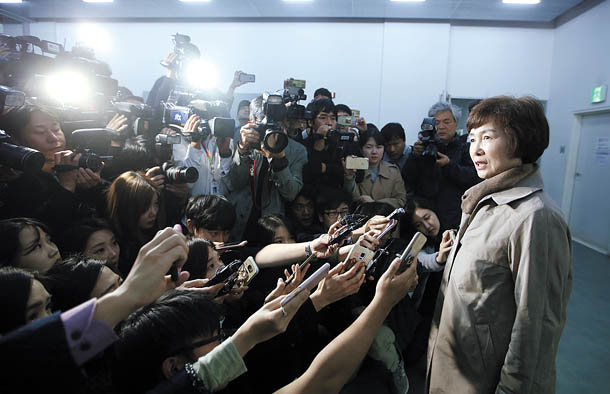 After recent allegation that a granddaughter of President Park Geun-hye’s close mentor was granted admissions to Ewha Womans University unfairly, professors will hold a rally Wednesday to demand the university president step down, taking up a cause students have been championing for some 80 days.

“Ewha Womans University, which has been under fire for its plans to build a college of continuing education, is now mired in a political issue,” said an emergency planning committee of Ewha professors in an official statement. “University President Choi Kyung-hee and the board of directors are handling the issues at the school dictatorially and failing to communicate with the university staff and students. It is high time that professors take up the cause.”

Professors will hold a rally in front of the main hall of the university, which has been occupied by students since July 28. It is the first time since the university’s establishment in 1886 that professors of the university have called for the ouster of the president.

It was the first year that the university allowed applications from equestrian athletes, and Chung was the only equestrian applicant accepted that year. According to the university, Chung's gold medal at the Asian Games equestrian competition contributed to her admissions.

But she is alleged to have been given preferential treatment.

“At the time, the dean of admissions told the officers to pick as a finalist the student who won a gold medal,” an admissions officer wrote anonymously on the website of the Ewha Womans University Faculty Council. “Among students who walked into the interviewing room that day, Chung brought in her gold medal.”

“Some admissions officers protested the dean’s direction and it was scrapped,” the officer wrote. “But I cannot say that the admissions decision on Chung was made under equal assessment standards.”

University records revealed additionally that Chung's gold medal should not have contributed to her admissions because it was awarded to her past the valid acknowledgement date for awards by the board of admissions, and also because Chung had won the medal in a team competition. The admissions procedure only recognizes medals won in individual competitions.

Chung was in the media spotlight recently for allegedly receiving preferential treatment by professors in classes, in which she allegedly submitted reports after deadlines but still received high marks.

Ewha Womans University hosted a closed-door meeting with students and professors on Monday over the allegations.

“There was no favorable treatment,” President Choi said. “The meeting will answer all allegations.”

But students are responding with anger.

“Students pull all-nighters to get good grades in classes that Chung took,” a student wrote in a message posted on a wall in Morris Hall, a university building. “It is disappointing that Chung got good grades without trying as much.”

Ewha students have been engaged in a sit-in since late July to demand the president step down and take responsibility for botched administrative decisions like sticking police on students.