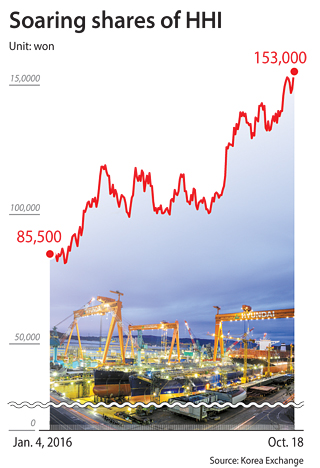 Although Korea’s embattled shipbuilding industry is undergoing restructuring, the stock value of Hyundai Heavy Industries (HHI) and its affiliate Hyundai Mipo Dockyard have risen since the beginning of the year.

HHI isn’t the only company undergoing restructuring that has seen its share value improve. The shares of Posco, the nation’s leading steelmaker, have also risen sharply recently. There are speculations that the shipbuilding and steel industries that have been struggling in recent years have hit their bottom and that the situation will likely soon turn favorable, which has been reflected in their share prices.

The share prices of Hyundai Mipo Dockyard have risen 51.8 percent and steelmaker Posco saw its prices rise 39.9 percent in the same period.

Analysts say this type of “contrarian investment” is similar to what happened in the United States in the 1990s.

Templeton, in fact, bought shares in the former SK Global when they fell to the 10,000 won level in April 2003 and sold shares he bought a year after when the price rose above 30,000 won, and made a profit of some 40 billion won profit, according to reports. In 2003, the company struggled on allegations of accounting fraud.

“HHI’s shares have continued to rise starting from the beginning of the year and we believe it is mainly due to the strengthened Korea’s won and the price of steel products that have seen the increase compared to the past,” said Park Moo-hyun, an analyst at Hana Financial Investment. “Our firm predicts the share prices to go up as high as 200,000 won and expects the shipbuilder to remain strong for the time being as Chinese competitors are getting weaker and the company’s new orders continue to increase.”

Another analyst has argued that Korea’s shipbuilding companies will have better sales data for the third quarter of this year compared to earlier this year.

“We believe most shipbuilders, except Daewoo Shipbuilding & Marine Engineering, will have surplus sales data for the third quarter of this year,” said Lee Kyung-jaa, an analyst at Korea Investment & Securities. “It will take them at least two more years to have solid net profits like they did in the past but we don’t think their financial conditions will not worsen further from now on.”