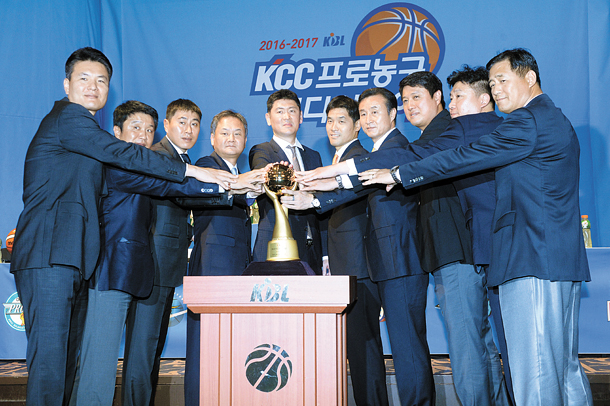 Head coaches of the teams in the Korean Basketball League (KBL) during the pre-season press conference on Wednesday in Seoul. The 2016-17 KBL season officially kicks off this coming Saturday. [NEWSIS]

Lee Jong-hyun, a 2.03 meter (six feet six inches) center from Korea University, has donned the Ulsan Mobis Phoebus uniform. After he was picked during the 2016 Korean Basketball League (KBL) draft on Monday by Phoebus head coach Yoo Jae-hak, the rookie promised to rattle up the league, starting by squaring off against his old college teammate, Lee Seung-hyun, forward for the Goyang Orion Orions and MVP of last year’s championship series.

“I may need a few years,” he said, “but in time, I’m going to outperform Lee Seung-hyun.”

“I know I’m shorter than him,” Lee Seung-hyun responded, “but I’ll show him why they call me the boss in this league right now.”

The rookie draft this year was considered possibly the best the league has seen since its birth, headlining the “Super Rookie Trio,” Lee Jong-hyun and Kang Sang-jae out of Korea University and Choi Jun-yong of Yonsei University. The debut of the trio is expected to reshape the landscape of the league, many experts say. 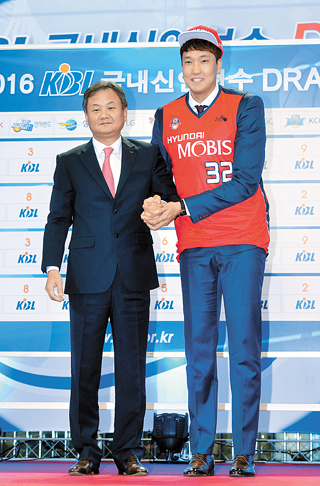 Along with the hype, where Lee Jong-hyun would end up has been the question of the year for the KBL, and after the Phoebus was given first pick during the draft lottery earlier this month, many expected the super rookie to wear red in the coming season. Although Yoo said the team will have to discuss who to pick between Lee Jong-hyun and Choi, no one questioned whether Phoebus would pass up this opportunity.

Since high school, Lee Jong-hyun has been called the “Beast of the Court.” His height is just the tip of the iceberg of the talents that he possesses. The center is also swift and agile and along with his 2.23-meter wingspan, that comes in handy when blocking opponents, he was often seen dominating the court under the basket. Experts assess the rookie as an aggregate of all the good things from Seo Jang-hoon, one of the most renowned centers of the KBL history, and Kim Joo-sung, a center for Wonju Dongbu Promy and the first player in Korea to tally over 1,000 blocks.

Lee Jong-hyun stood inside the key for the Korean national team when it won gold at the 2014 Incheon Asian Games and he tried his luck in the National Basketball Association (NBA) of the United States by participating in the 2015 NBA Draft, though he eventually went undrafted.

“I’m still recuperating from the broken foot I suffered two months ago,” he said when JoongAng Ilbo met him recently. “It’s good that I can get some rest for the first time in ages, but I cannot wait to be active on the court again.”

Before the draft on Tuesday, Lee said he is worried he might fail to meet everyone’s expectations.

“I think this will be a turning point in my life,” he said, “starting my professional career with the Phoebus.”

Lee has already played under Yoo’s watch during the Incheon Asian Games and says the advice given by the coach forced him to pull himself together. “He told me to work hard and not settle for what I have accomplished so far, including the gold from the Asian Games,” the rookie said.

The newcomer also expects to bring the team synergy by working together with Yang Dong-geun, a veteran guard and franchise star of Phoebus. “When I did not understand precisely what Yoo was instructing me to do [during the Asian Games], it was Yang that clarified things up. I cannot wait to be on the court with him.”

Lee Jong-hyun’s role model is Kim of the Promy, whose number is 32. “I started to wear No. 32 since middle school,” the 22-year-old center said. “I hope to surpass his record in blocks one day.”

And regarding the number, which was engraved in the jersey that Lee Jong-hyun wore at the draft, one of the officials of Phoebus said No. 32 was initially the uniform number given to Phoebus’ new import, Nate Miller. After getting the news that Lee Jong-hyun might join the team as a rookie, Miller watched videos of his plays and gave up the number, saying he would like to give the number to the player who will be the future of the team.

“I was lucky enough to experience so many wins from high school until I got here,” the rookie said. “I would like to bring that energy to the court for Phoebus. This year as a rookie, I will shake up the league.”