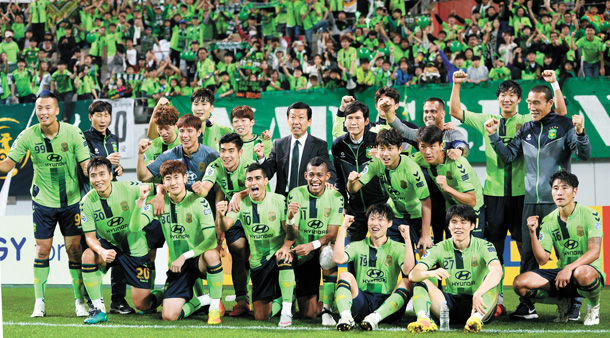 Jeonbuk Hyundai Motors coaching staff and players celebrate as they progress to the finals of this year’s Asian Champions League on Wednesday. Jeonbuk defeated FC Seoul 5-3 in the ACL semifinals series. [NEWSIS]

Jeonbuk Hyundai Motors prevailed through the semifinals of this year’s Asian Champions League (ACL), paving the way for their first top regional honor in a decade.

At this year’s ACL East Zone semifinals, which turned out to be an all-Korean duel between Jeonbuk and FC Seoul, Jeonbuk concluded the two-game series with a 5-3 victory over Seoul to roar their way into the finals.

The second-leg match of the semis took place on Wednesday at Seoul World Cup Stadium. In the game, Jeonbuk lost to their domestic rivals 2-1 but as they had some cushion in the matchup after dominating the first one 4-1, this secured their series win over Seoul.

During Wednesday’s game, in which players on each side shed blood and tears, it was Carlos Adriano of Seoul who ended the deadlock. Near the end of the first half, Adriano pushed the ball after receiving a cross from the flank, his 13th in the ACL this year. But in the lead up to the goal, while Seoul’s Ju Se-jong, who tore up his forehead and had to get 21 stitches from the K-League Classic match last week, went into the game despite the wound, Kim Bo-kyung of Jeonbuk injured his head early in the first half after crashing into his opponent while vying for the ball. He was seen bleeding but still managed to play until the 55th minute with bandages wrapped around his head.

Seoul’s relentless attack threw off Jeonbuk but Choi Kang-hee, as good a tactician as he is, decided to counter by adding more force to his offensive line, putting in Lee Dong-gook and Go Moo-yul, both forwards, early in the second half. With four strikers on the pitch, Jeonbuk quickly equalized the match, netting a goal 14 minutes after the start of the second half when Ricardo Lopes curled in a shot from the right side of the field. The “one percent probability” left for Seoul that their skipper Hwang Sun-hong was counting on looked to be disappearing into thin air.

Although Seoul’s Ko Kwang-min scored another goal during injury time, it wasn’t nearly enough to make up for the deficit left in the series from the previous game and the cord of Jeonbuk’s campaign to the top was finally cut.

“We can still feel the pain from five years ago,” said Choi after the game, referring to the ACL in 2011 when Jeonbuk reached the finals but lost. “We will prepare ourselves thoroughly to elevate our league and our team.”

As for Seoul and Hwang, although the series slipped out of their hands, they have redeemed themselves by taking the first win over Jeonbuk this year. After Seoul made a drastic managerial shift in June, the team seemed to be struggling, unable to cope with Hwang’s new management style and the old playing style to which Seoul players were accustomed. But the win on Wednesday is clear evidence that the Seoul-based club is back in top form. “It’s important that we have ended our losing streak against Jeonbuk and the players must remember how we beat them today,” Hwang was quoted as saying by Yonhap News Agency. “I found out through today’s match that our players have the competitiveness and passion to play better. If we can play aggressively like we did on the pitch today, I think we can face any team.”

Jeonbuk will now vie for the ACL title, the accolade that eluded K-League’s powerhouse for a decade. In the coming final series, which starts on Nov. 19, Jeonbuk will take on Al Ain of United Arab Emirates.