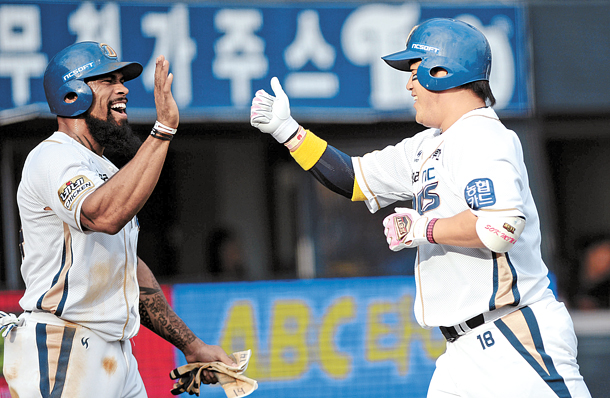 Park Sok-min, right, celebrates after hitting a two-run home run with his teammate Eric Thames on Saturday against the LG Twins. Park’s homer of the day was the winning hit for the Dinos, who will try to end the series today in Jamsil, Seoul. [NEWSIS]

The NC Dinos of the Korea Baseball Organization (KBO) took down the LG Twins, the underdogs of this year’s third round of postseason, twice while down at Masan Baseball Stadium in Changwon. Now the Dinos travel to Jamsil in Seoul today, hoping to secure their Korean Series berth after tonight.

The first two games of the series played at the Dinos’ home stadium came to an end thanks to Park Sok-min, a 9.6 billion won ($8.45 million) third baseman from the Samsung Lions.

During the second game of the series on Saturday against the Twins, Park belted a two-run homer, ending the deadlock that lasted until the seventh inning. The Dinos kept the two-run lead, winning the game 2-0 and putting themselves in a more advantageous position for this year’s Korean Series. The Dinos now need just one more win in the next three games to meet the KBO pennant winners, the Doosan Bears.

After signing a lucrative four-year deal with the Dinos, which made him the most expensive free agent (FA) in the history of KBO, expectations swelled that Park will put the Dinos, a rather young team still in the fourth year of its existence, on the map.

But with injuries hampering his season, the slugger only made it into 126 games, ending the regular season batting .307 with 32 homers and 104 runs batted in. Although Park cranked more than 30 home runs for the first time in his career, his rival in the position, Choi Jeong, an FA third baseman for the SK Wyverns who was the most expensive FA before Park, yanked 40 to take the home run title of the season.

But Park’s experience came in handy as the Dinos started out their quest for the Korean Series in the postseason, as was proven on Saturday. Park is expected to add that much more power if the Dinos go into the Korean Series. As a veteran of the KBO who spent 10 seasons with the Lions, Park has been in seven Korean Series, winning four.

“I was not nervous,” said Park, who was selected Most Valuable Player of the game. “In a postseason match, my role in fielding comes first, so I concentrated on not making any fielding errors.”

“David Huff [the Twins starter] threw the pitch near me, which was unsettling,” Park added. “But I think I batted that one particularly well. As soon as I hit it, I thought it might go over the fence. I just kept thinking to myself, ‘go over, go over,’ and it went over. But I think we have to credit Zach Stewart [the Dinos starter] for his performance on the mound for the win.”

After Saturday’s win, the setting will be shifted to Jamsil, Seoul, the home of the Twins, for the next two games. At today’s game, Jang Hyun-sik, a 21-year-old righty, will be starting for the Dinos. With Lee Jae-hak out of the roster for possible involvement in a game-rigging controversy, Kim Kyung-moon, the Dinos’ skipper, decided to mobilize a younger pitcher in the postseason, although Jang’s listing in the Dinos’ lineup comes earlier than anticipated.

Averaging 4.48 earned runs with one win, three losses and one hold in 37 games this year, today’s game will be the first postseason assignment in Jang’s career. Kim Tae-gun, the team’s catcher, said during a pre-game press conference that Jang “will be one of the key players for the upcoming matches. He’s finished the training well.”