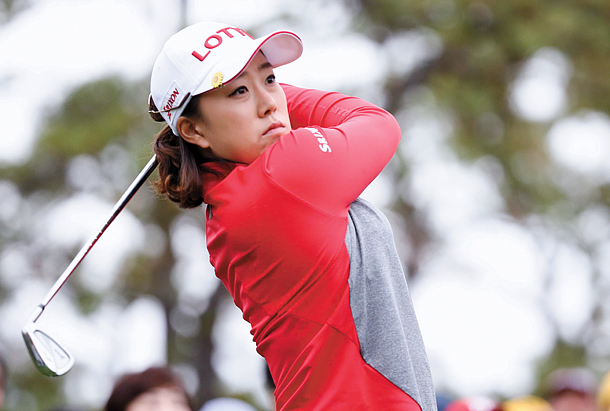 Kim Hae-rym tees off at the second hole of the final round of the KB Financial Group STAR Championship on Sunday. Kim claimed her first major victory at the event by defeating Jung Hee-won in the playoff. [NEWSIS]

The KB Financial Group STAR Championship lived up to its reputation as the final KLPGA major event of the season when the event’s competition proved so fierce that the outcome remained uncertain until the playoff round.

But after the playoff on a drizzling Sunday at Lakewood Country Club in Yangju, Gyeonggi, the trophy from the KB Financial Group STAR Championship went to Kim Hae-rym, who clinched her second win of the season - and of her career.

The lead-up to the playoff round was quite exciting for Kim, who finished the third round at third in the leaderboard.

Starting out the day with a par at the par-5 first hole, Kim added a birdie at the second, one of the four she carded throughout the day. The climax of her day, however, was from the fifth to seventh holes. After saving par on the third and the fourth, Kim birdied the fifth before nailing an eagle at the par-4 sixth hole. Her approach made an arc to land near the pin, and with the forward spin, rolled several inches before sinking into the hole. She went and birdied the next hole, the par-5 seventh hole, but the eagle at the sixth turned out to be the highlight of the day, not just for Kim, but for the entire tournament.

Although she hit a brief bump, bogeying the 14th, she redeemed it with a birdie on the next hole.

While Kim was climbing the leaderboard ladder, Jung Hee-won kept herself near the top as well. As Kim, then-leader, was wrapping up the 16th hole, Jung - who was playing in a group before Kim and was ranked second, trailing by only one stroke - landed a birdie attempt at the 18th into the hole, quite a move since the ball was several yards from the pin. After Jung’s birdie, Kim parred the 17th and moved on, hoping for a birdie at the next hole.

Her third shot at the par-4 18th was especially nail-biting, as it would determine whether the tourney would go into the playoff. The long birdie attempt refused to see the bottom of the hole, and her failure forced the entire tournament into a two-way playoff between herself and Jung, who finished the regulation 19-under.

The playoff started with the crowd gathered near the teeing ground of the 18th. Kim took the first shot of the round, which curled to the left, landing just outside of the fairway. Jung’s tee shot, in comparison, stayed on the green.

The second shot by the two looked more or less similar, with both landing at the close edge of the greens. But Kim took the third shot on the green and nailed an unlikely birdie putt, a shot similar to her final shot in the event last year, which she missed, failing to force the event into the playoff.

During the interview after her win, an elated Kim said, “During my last win [Kyochon Honey Ladies Open in May], I also recorded an eagle. So with an eagle early in the round, I thought maybe I could win again today.”

She added, “My goal was to claim my first win as well as my first major win and I accomplished them all so this year is very meaningful to me.”