Pacquiao weaves past scandal back into ring

Pacquiao weaves past scandal back into ring 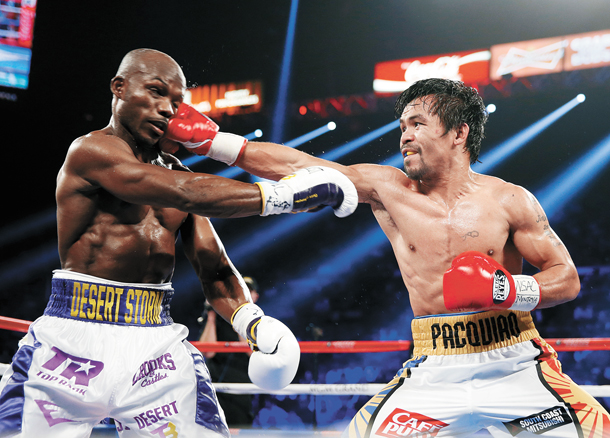 Manny Pacquiao, right, of the Philippines, fights against Timothy Bradley of the United States during their WBO welterweight title boxing bout in April this year in Las Vegas, Nevada. Although the bout was the retirement match for Pacquiao, who said he will focus on his political career after stepping out of the ring, the Filipino boxer will be returning in early November in a bout against Jessie Vargas, the current WBO welterweight title holder. [AP/NEWSIS]

LAS VEGAS - Up until last week, Manny Pacquiao was concentrating on trying to get the death penalty restored in the Philippines.

Now he’s focusing on something not nearly as controversial - his return to the ring for a Nov. 5 fight with Jesse Vargas.

“Working in the Senate is not easy while you’re training,” said Pacquiao, a freshman senator in the Philippines. “You manage your time and that’s what I did in training for this fight.”

Pacquiao won’t have to juggle two jobs for at least a few weeks, with the Senate now out of session. He arrived in Los Angeles over the weekend, eager to finish final preparations for yet another fight in a pro career that has stretched 21 years.

What remains to be seen is how eager boxing fans are to see him against a relatively unknown boxer who isn’t given much of a chance to beat him.

“You can say what you want about Pacquiao and Vargas,” promoter Bob Arum said. “I think it’s competitive, other people don’t. That’s their opinion.”

Pacquiao joined Arum on a conference call Monday to discuss the latest reinvention of the fighter-turned-politician. The talk veered from boxing into politics, and to Pacquiao’s two biggest goals as a freshman senator - forming a boxing commission in the Philippines and restoring the death penalty eliminated in the country 30 years ago.

“I’m enjoying working hard in the Senate while performing my job as a boxer,” Pacquiao said. “I’m enjoying both.”

Pacquiao, who was dropped by Nike earlier this year after saying people in gay relationships were “worse than animals,” is an ally of new Philippines President Rodrigo Duterte, who has suggested recently that his country might be better off without its close alliance with the United States.

Pacquiao seemed unconcerned that the comments might cost him some fans in the country where he has made millions of dollars.

“Everything is fine,” Pacquiao said. “He has clarified everything about the relationship between the U.S. and the Philippines.”

Trainer Freddie Roach said everything is also fine with Pacquiao’s boxing career, which was on hold after a temporary retirement last year. He was impressive in April in dominating Timothy Bradley in their third fight, and Roach said he has spent weeks training in the Philippines for Vargas.

Most of those training sessions were at night, as Pacquiao fulfilled a campaign pledge to be in the Senate each day it was in session.

“This is the best I’ve seen Manny in a long time,” Roach said. “He’s been a lot more aggressive. The old Manny Pacquiao is coming out.”

Pacquiao’s star has faded some since he lost in boxing’s richest fight ever to Floyd Mayweather Jr., and putting him in the ring with Vargas is a tough sell. Arum has added three title fights to the undercard and is going on his own in trying to sell it on pay-per-view.

As part of that sales job, Arum is holding out the possibility that Pacquiao will fight unbeaten Terrence Crawford next spring should he beat Vargas.