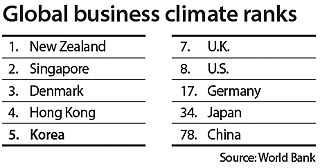 Korea remained one of the top business climates in the world, largely due to its improvement in the process of starting up a business, tax systems and how it handles legal disputes.

However, Korea’s ability to protect small investors as well as the rights of lenders and the process for clearing customs has deteriorated.

According to the World Bank’s annual “Doing Business” report that analyzes the business environments of 190 countries, Korea’s rank dropped one notch from fourth place in 2015 to fifth this year. However, Korea has remained within the top 10 countries in the rankings since jumping from 16 in 2010 to eighth place in 2011.

In the study, Korea ranked first in stable electricity supply. The country held the same position in 2015.

It also took the No.1 spot in mitigating legal disputes, one notch up from last year’s second place as the Korea court has actively encouraged disputing parties in civil litigation cases to reach an agreement.

Korea also kept its leading positions in business closure largely thanks to improvement in commercial insolvency investment recovery rate as well as the costs in the bankruptcy process. Korea ranked fourth in the “resolving insolvency” category, which is the same position it took a year ago.

According to the Korean Finance Ministry, the rate of recovering investments from commercial insolvency has risen from 83.6 percent last year to 84.5 percent.

But the biggest improvement was in starting a business. That ranking jumped 12 notches from 23 last year to 11 this year, largely because the process to start a business was simplified as companies are now allowed to pay their four major insurances online.

Rankings for tax payments also moved up from 29 last year to 23 due to the improvement in the tax payment process, especially for small and midsize companies.

But when it comes to protecting minority investors’ Korea’s rank has fallen from eight in 2015 to 13 this year. But the drop in rank was largely due to the improvement of competing countries over protecting small investors. Additionally, Korea’s protection for lenders saw its rank fall from 42 to 44, as when a business goes under and is stripped apart, the employee wages and government investments coverage are prioritized first over lenders.

This year New Zealand was ranked has having the most favorable business environment, a position that Singapore held last year. This year, Singapore came in second. Korea’s rank still remained high compared to other major economies, including the U.S. and Japan.

“Thanks to the persistent government efforts in regulation reforms, the business environment is now at one of the top leading positions in the world,” said a Finance Ministry official. “We will continue our efforts in all areas economic and social, including labor, finance, public services and education to create a better environment in doing business while creating job opportunities.”