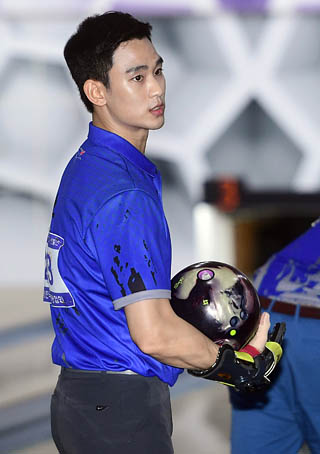 Actor Kim Soo-hyun is one step closer to becoming a professional bowler, as he successfully finished the first round of the 22nd Korean professional bowling tryouts, held on Oct. 22 and 23 in Gyeonggi.

If Kim passes the second round over the weekend, he will join rhythmic gymnast Shin Soo-ji and actor Jang Hee-woong, who both became professional bowlers in 2014.

The Korea Professional Bowling Association selects 10 male and 10 female athletes each year based on their combined scores after two rounds of bowling tryouts, but for celebrities, who can potentially contribute to bowling’s popularity, a second round is not required. Kim, however, decided to compete in the second round anyway.

An official from Kim’s agency, KeyEast Entertainment, explained, “From the moment he decided to take on the new challenge, Kim wanted to be treated just like everybody else and did not wish to receive any kind of special treatment just because he’s a celebrity.”

And Kim showed during the first round that his talent isn’t limited to acting, scoring an average of 214.6 points over 30 games, and ranking 31st out of 114 participants.

As soon as he entered the first game, he made a five-bagger, or five consecutive strikes, and finished the second game with the highest points among candidates, 278.

The next day on Oct. 23, Kim was scoring at the lowest 160, but was able to turn things around by scoring nine strikes in a row and earning 246 and 268 points in the ninth and 10th games. Kim thrilled the audience during his 11th game by making nine straight strikes.

“Most athletes can’t hide their nervousness during pro-bowling tryouts,” said Kim Hyun-bum, a professional bowler who taught Kim over the past seven months. “But Kim looked as if he was enjoying the moment and performed just as well as in practice.”

Kim, who started bowling as a hobby in 2013, is known to practice five hours each day with his coaches, Kim Hyun-bum and Park Kyung-shin. Kim Hyun-bum said, “Kim’s hand is full of scratches and callus from practice, and I know how hard he works.”

Kim surprised the bowling community with his performance. He was fast to make changes according to the new lane patterns and remained focused when he made mistakes.

“Kim has fundamentals as a pro-bowler and is an elegant performer,” commented Kim Hyun-bum. Park added, “He has also built strength from weight training over the years.”

K-pop rock band F.T. Island’s main vocalist, Lee Hong-gi, and singer Chae Yeon also competed on Oct. 22. Lee finished with an average of 191 points, just enough to earn his ticket to the next round. Chae Yeon scored an average of 181.8 points, failing to make the cut.

“More celebrities will join professional golf or bowling as a hobby,” said sports commentator Choi Dong-ho, “but giving favors to celebrities raises the question of fairness, although their contribution to the popularity of sports should be praised.”