In the latest warnings on risk factors hindering the nation’s economic recovery, several studies released last week have raised red flags about the debt taken on by small-business owners, particularly retired and retiring baby boomers, as well as young people.

The Korea Institute of Finance noted that the debt burden of self-employed business owners in their 20s and 60s has grown significantly, which could turn into a major problem if the Bank of Korea begins to raise the key interest rate in accordance with the U.S. Federal Reserve’s moves later this year.

As of May, the debt-to-income ratio of business owners in their 60s was at 286.5 percent. Not only is this the highest ratio compared to any other age group, it also saw the sharpest increase from May 2009. During that seven-year period, the ratio has grown 78.4 percentage points from 173.9 percent.

The debt-to-income ratio of self-employed business owners in general saw the second-sharpest growth during the same period, expanding 62.3 percentage points in the last seven years to 173.9 percent. 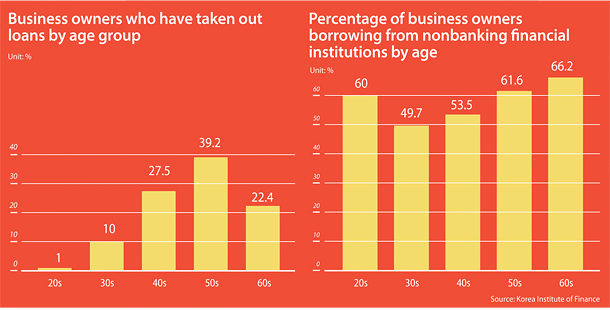 Business owners in their 60s, on the other hand, have been taking out more loans.

The study comes at a time when the Korean government is trying to curb the rapid growth of mortgage loans following a boom in the real estate market, which has been centered on popular wealthy neighborhoods like Gangnam in southern Seoul.

As part of its countermeasures announced in late August, the government has been pressuring financial companies, including nonbanking institutions such as cooperatives and consumer finance companies, to significantly reduce the number of loans they give out.

While the measures are focused on curbing debt from mortgages, the debt taken on by self-employed business owners has been on the rise as more people are starting up their own businesses.

An analysis by Korea Ratings released Tuesday based on data from 12 Korean commercial banks found that loans taken out by small-business owners have amounted to 185.5 trillion won ($162 billion) as of June this year. When compared to the end of last year, this is a 4.4 percent increase and a sharper growth compared to mortgages, which grew 3.6 percent during the same period.

Loans taken out by small-business owners now account for 17.7 percent of all loans borrowed from banks, the total of which amounts to 1,046.1 trillion won.

Market experts point to a struggling economy and fewer job opportunities as reasons for the uptick.

“The increase in the number of people retiring, along with high youth unemployment, has driven many to start their own businesses,” said Song Jae-man, a senior researcher at the Hana Institute of Finance. “Additionally, due to ongoing corporate restructuring that has led to the downsizing of corporate loans, banks have been increasing loans to self-employed business owners.”

Statistics Korea found there were 79,000 more self-employed individuals in August compared to a year ago and 86,000 more in September, the sharpest growth in four years. The statistics agency speculated the increase was due to ongoing restructuring in the shipping and shipbuilding industries as well as the high unemployment rate of 9.4 percent last month.

The recent increase in loans being taken out by self-employed business owners has contributed to an earnings surprise for local banks.

Hana Financial Group announced that its net profit for the third quarter surged 76.6 percent to 450.1 billion won from a year ago. This achievement is especially significant considering that the Bank of Korea has kept the benchmark borrowing rate at a historic low of 1.25 percent since June. Hana Financial Group’s performance was the best in four years.

While the financial group attributed this performance to the recent increase in mortgages thanks to the boom in the real estate market, it also cited the rising number of loans being taken out by self-employed business owners and small and midsize businesses, which have replaced the shrinking number of corporate loans.

As the Korea Institute of Finance report has shown, the burden of self-employed business owners has gone up. But what market experts worry about most is the quality of the loans, as more of these borrowers have sought loans from nonbanking financial institutions that charge higher interest rates.

According to the Bank of Korea and Financial Supervisory Service, as of the first half of this year, loans borrowed by small-business owners amounted to 249.4 trillion won, up 12 percent from 222.7 trillion won last year.

During the same period, loans from savings banks, which in Korea are more like consumer finance companies catering to low-income, bad-credit borrowers, increased 23 percent from last year to 7 trillion won, while loans from cooperatives like Nonghyup and Suhyup have surged 59 percent to 22.7 trillion won.

“[Self-employed business owners] are borrowing loans from nonbanking financial institutions because they find it difficult to borrow loans [from banks] as they are either required to have collateral or prove their income,” said Song of the Hana Institute of Finance.

The Korea Institute of Finance report showed that the older the self-employed business owners were, the more they relied on such nonbanking financial institutions for loans.

Among those in their 60s that are self-employed, 66 percent borrowed from nonbanking financial institutions. Those in their 50s trailed behind with 61 percent, while 60 percent of those in their 20s did the same.

“The problem is when the market situation becomes unfavorable and their earnings drop, the risk of debt held by these older and younger people becoming insolvent is high,” said Noh Hyoung-sik, a researcher at the Korea Institute of Finance.

There is speculation that the government will likely address problems surrounding loans for small-business owners when it announces overall debt-curbing measures on Thursday.

An economic ministerial-level meeting chaired by Finance Minister Yoo Il-ho last Thursday came to the conclusion that coming up with additional measures to curb debt will help with economic recovery.

Meanwhile, the Bank of Korea has continued to maintain the key interest rate at 1.25 percent. Commercial banks, however, have gradually been raising interest rates on household loans.

A study by the central bank showed that interest rates on new mortgages at commercial banks last month rose 0.1 percentage points from August to 2.8 percent.

This is the biggest monthly increase on mortgage interest rates since October last year, when it rose 0.14 percentage points from the previous month. It was also the second consecutive month that banks have raised interest rates on loans. August’s average rate was up from 2.66 percent in July.

This is a reversal from the first seven months of this year, when interest rates on such loans continued falling from January to 3.1 percent.

The current trend seems to be continuing this month. This has been seen as a result of increasing pressure from the government to downsize fresh loans especially since the government hinted at such intentions while announcing plans to cool down the real estate market in late August.