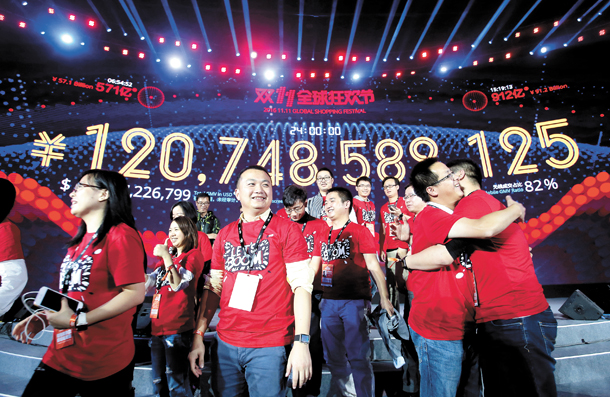 Sales during the 24-hour online promotion reached over 20.6 trillion won ($17.7 billion) on Friday, a 32 percent jump year on year and the largest ever figure since billionaire Jack Ma’s Alibaba pioneered the annual shopping spree in 2009.

About 60 Korean retailers participated in the sales feast, seeing favorable sales especially in the cosmetics and household items sector.

Korean retail giant E-Land, which had been preparing a whole year for the single promotion day, saw an 89 percent surge in sales compared to last year bringing in 56.3 billion won. The company established a logistics application to ensure quick updates on its inventory level, and also increased the number of staff by 20 times to handle the flood of orders. 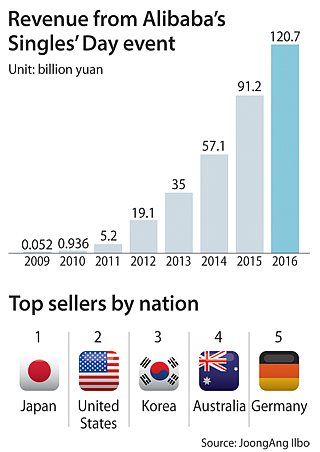 Online juicer seller Hurom saw a sales increase of 17 percent to 21 billion won. Starting in June, it selected target products for promotion with Alibaba and discussed pricing, production and logistics to be ready for the big event.

ICB, the official agency of Alibaba’s courier service Cianiao, which handles Korean products ordered through Alibaba’s T-Mall and shipped to China, even chartered a plane this year to effectively respond to increased orders, from 350,000 deliveries last year to 500,000 this year.

“We tried to shorten the time from the average of 7.7 days it takes from purchase to releasing the product from storage to about five days,” said Lee Han-yong, CEO of ICB.

However, the overall performance of Korean companies during this year’s Singles’ Day was relatively weak. While the best-selling items on Friday included Apple’s iPhones, Samsung Electronics’ smartphones were missing from top-selling lists, being beat by smaller Chinese phone makers such as Meitu. Explosions caused by the Korean electronics giant’s Galaxy Note7 phablet have been a major blow to its reputation and sales in the country.

“Chinese consumers are increasingly becoming rational on making product choices and Korean companies should focus on developing innovative and high-quality products,” said Jung Kwang-young, representative of Korea Trade-Investment Promotion Agency to China. “They should also closely watch the rapid growth of Chinese local brands and build up strategies against them.”

Singles’ Day was invented by college students in the 1990s as a counter to Valentine’s Day, according to the Communist Party-owned People’s Daily. Written numerically, Nov. 11 is reminiscent of “bare branches,” a local expression for bachelors and spinsters. It’s since morphed into a consumption phenomenon involving months of planning, millions of logistics and technology personnel, and a nationwide cascade of ads and promotions.

“Many foreign brands, with and without local China presence, will use this shopping event to further raise their brand profile with Chinese consumers,” said Andria Cheng, an analyst at eMarketer.

Even as the big day has ended, domestic department stores are hoping to attract customers after Singles’ Day and before the United States’ Black Friday, which falls on Nov. 25, through various promotional events of their own.

Lotte Department Store will begin an end-of-season promotional event from Nov. 18 at all 33 branches in the nation. Customers will be able to find foreign fashion brands marked with 30 to 50 percent discounts.

Hyundai Department Store also plans to open up a sales promotion on overseas fashion brands from Nov. 18. Autumn and winter clothes will be offered at a 10 to 50 percent discount, according to the company. Shinsegae Department Store offers discounts of a maximum of 70 percent on some products. The promotional event, which runs from Nov. 17, will feature 470 brands.