Kim will stay on with the Bears

Kim will stay on with the Bears 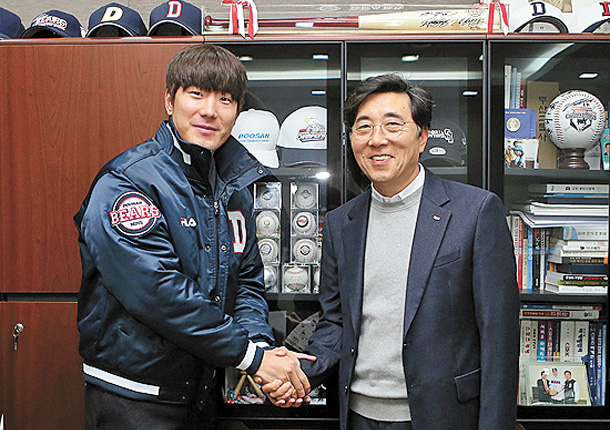 Kim Jae-ho, a shortstop for the Doosan Bears, became the first free agent (FA) to secure a deal this year, inking a four-year contract to stay on with the Bears.

The Bears, champions of the Korea Baseball Organization (KBO), announced on Tuesday that Kim has signed with them a four-year deal worth 5 billion won ($4.28 million); 2 billion won as a signing bonus, a 650 million won annual base salary and 400 million in incentives.

After the free agency opened up last week, the 31-year-old shortstop became the first one to land an FA deal at this year’s FA market.

Under Kim’s leadership, the Bears cruised through the pennant race and set a new single-season win record of 93 victories. The Bears eventually went all the way to take their second straight KBO championship by taking down the NC Dinos in just four games during the best-of-seven Korean Series.

Making his debut with the Bears in 2004, Kim’s career took off after he returned from serving in the military. In 2008, his first year back after he was discharged, Kim played in 112 games and batted .249. Although the infielder hit a brief bump in 2011, Kim quickly bounced back the next year and has given a steady performance ever since.

Kim also made it into Korea’s final roster for the World Baseball Classic next year, his second stint while donning the national team uniform since the 2015 World Baseball Softball Confederation Premier12, during which Korea took the championship title. Kim was the starting shortstop for Korea then.

“Since I joined the Bears in 2004, I have wanted to wrap up my career as a Doosan man,” said Kim. “And I thank the team for giving me the opportunity to do so.”

He added, “When I played in the second team and as a back up, I never thought a day like this would come. I am here today because of my family, my coaches and my teammates. I hope others who are in the second team do not give up their hope and always stay positive.”