Park comes away from Asian meet with 4 golds

Park comes away from Asian meet with 4 golds 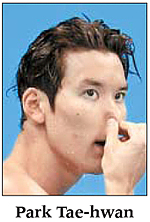 Korean swimmer Park Tae-hwan claimed four golds from a major swimming competition in Asia, raising hopes among Korean fans that he may stay in the pool until the 2020 Tokyo Olympics.

Park, a former Olympic champion with one gold and three silvers from the past Games, participated in the 10th Asian Swimming Championships at Tokyo Tatsumi International Pool, where he won gold in the 100-meter, 200-meter, 400-meter and 1,500-meter freestyle.

Park started off his medal rally on Friday by winning the 200-meter and 400-meter events after clocking one minute and 45.16 seconds and 3:44.68. His 200-meter time puts him at second in the world this year, after Sun Yang of China with 1:44.63, and ahead of James Guy of Great Britain with 1:45.19. His time in the 400-meter freestyle, which is also his main event and earned him Olympic gold in 2008, fell short of his personal best this season. Park’s best time in the 400-meter race came in October, when he clocked 3:43.68 during the Korean National Sports Festival.

Park was also the first to finish the race on Saturday in the 100-meter event with a time of 48.57. He was ahead of runner-up Katsumi Nakamura of Japan by 0.2 seconds and Yu Hexin of China by 0.24 seconds.

After the 100-meter event, Park participated in the 1,500-meter race, during which he was once again the first swimmer to touch the pad. Park’s record for the race was 15:07.86. He participated in the 50-meter freestyle Sunday, where he finished fifth.

This is the first international meet since the 2016 Rio Olympics, during which he failed to make it out of the heats in the 100-meter, 200-meter or 400-meter races.

In the lead up to the Rio Games, Park was mired in a doping controversy. Though he served the International Swimming Federation’s ban, he was barred from the national team by the Korean Olympic Committee. He fought on, saying it was double jeopardy, and eventually won the legal battle after taking the case to the Court of Arbitration for Sports.